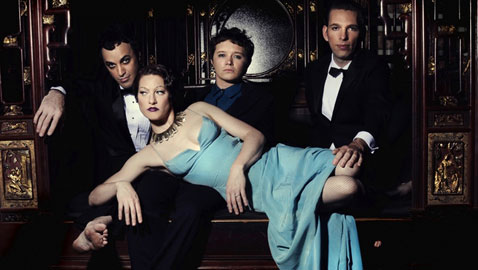 Amanda Palmer and The Grand Theft Orchestra (via NPR) are offering a free download of “The Killing Type,” a song from their Sept. 11 album “Theater Is Evil.”

The track will be fresh in the minds of Cambridge fans, since Palmer and the band performed a fairly studio-faithful version of it just July 31 at their Middle East Downstairs show — a performance posted almost immediately on YouTube:

The song, described by Palmer publicists as “a brutal love song led by a thrumming baseline and Palmer’s signature storytelling lyrics, which build to a frantic climax,” was thought up in Amsterdam during an inspired 20-minute walk to a hotel when Palmer lacked a working phone to distract her. As she told NPR in an e-mail:

When I got home I banged out the chords on the ukulele I had with me and finished up the final verse. It’s a good argument for ukuleles. And a good argument against phones. But what to do? This is the future.

The song (the idea behind it being, as the lyrics say, “I’m not the killing type/I would kill to make you feel”) already, rightfully, has its fans.

“I absolutely love this song! The only thing I still need is the lyrics, so I can properly sing it at the top of my lungs in traffic as I’m pounding the steering wheel,” one NPR commenter said.

Mary Gaughan, of the Rivervox tumblr, gave this review of the song to NPR, calling it “a sleeper”:

One of the songs on an album that you might not pay attention to with all the flash and sparkle of the hits. But then, as you are innocently browsing the aisles at the grocery store or going to sleep at night, it sneaks up on you. First as a hum, then a lyric here and there until finally you are completely infatuated and inhabited by the song. The simple Cars-like guitar sound serves as a grounding for Palmer’s raw and moving lyrics as the song winds itself up, gaining power and complexity with every verse.

The 35-date tour starts Sept. 10 in Philadelphia, with Boston’s Paradise Rock Club getting three dates, Nov. 15-17. Palmer’s publicists say the live stage show, still in development, “will be chock full of surprises” and use “new interactive technologies with a variety of collaborators … the band plans to crowd-source everything from musicians to family photos and other personal artifacts, placing the audience members’ voices and bodies directly into the performance.”

“We’re all theater geeks,” Palmer said, “so the whole band is like a massive transformer robot that can be a slamming rock band and also be an emotional avant-garde musical.”