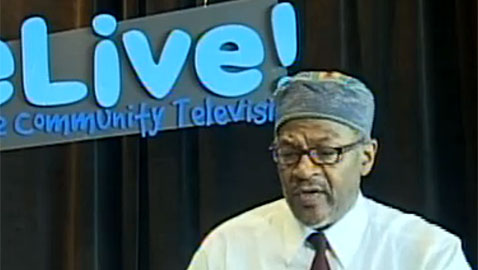 Hasson J. Rashid, the Republican write-in candidate for state representative in the 25th Middlesex District, on the set of one of his CCTV programs.

Hasson J. Rashid, the Republican write-in candidate for state representative in the 25th Middlesex District (identifying himself proudly as a Muslim-American candidate) has distributed a filled-out candidate’s Q&A outlining his views. Citing the need for “freedom, justice and equality for all peoples” and the belief that Democrats’ grip on the district has led to dissatisfaction from nearly all voters, he urges write-in votes based an at-times offbeat and even confusing mix of ideals.

The 25th is the longtime seat of Democrat Alice Wolf, who announced in March that she would retire from the seat. He will be running against a Democrat to be decided in a Sept. 6 primary — either city councillor Marjorie C. Decker; Gayle E. Johnson, a community activist with experience as a House and Senate aide on Beacon Hill; and Lesley Rebecca Phillips, chairwoman of the Ward 6 Democrat Committee and a founder of the Progressive Democrats of Cambridge. (See this Cambridge guide to the 2012 elections for a more complete rundown of area races.)

In the Q&A, Rashid said he opposes spending on such things as legislators’ commuting costs and is skeptical about the need for continued repair on the Maurice J. Tobin Memorial Bridge, sometimes known as the Mystic River Bridge, but does not want to be listed in favor of small government and is not dogmatically in favor of reducing the size of government and taxation.

He also does not want to be listed as “pro-Second Amendment,” and while he believes gun license fees should be low to encourage legal gun ownership and supports hunters’ rights, says he would vote “to diminish gun owners’ rights.”

Then, in stances sure to be more controversial in socially liberal Cambridge, he says “I define marriage as one man and one woman only, and you can take my word to the bank” — no word on how that squares with “freedom, justice and equality for all peoples” — and he wants to defund Planned Parenthood and direct taxpayer funds to “abortion crisis centers” that dissuade prospective parents from getting abortions.

“The baby becomes a person at the fetus stage, when the soul is deposited,” Rashid said. “To abort at that stage is cold-blooded murder.”

Still, he would allow abortions when needed to save the mother’s life.

The complete questionnaire, with grammar and punctuation cleaned up for publication, is here:

Values/issue statements
I believe in a pure political reform base, grounded in freedom, justice and equality, to steer and guide our community’s body politic safely and securely through the difficult days and not-so-difficult days of the 21st century ahead for all that reside, work, worship and play in the Commonwealth of Massachusetts and beyond. The greatest concern of mine within the 25th Middlesex District is that the citizens and residents are dissatisfied with the current crop of elected Democrats. For several decades the Democratic Party’s elected officials have held a tight grip on politics in the district. This domination has left a bitter taste of dissatisfaction in the mouths of our diverse population here and dissatisfaction with this form of politics runs nearly 100 percent, led with a sell-out to elite developers and little benefit to low-income citizens, residents, taxpayers and voters. Democratic politics in the 25th Middlesex District is an obsolete mentality left over from the 20th century. How can true progress and new forms of social change be forthcoming in the 21st Century? It’s like riding forward on a dead horse.

I am running because I believe in freedom, justice and equality for all peoples.The biggest change I bring is work toward true transformation and social change (21st century thinking) and not of our obsolete (20th century) sociopolitical vision and body politic.

Yes/no questions
1. Government
Please list me in favor of small government. NO
Let people earn, save and spend their own money. YES
I believe in the men and women in our military and will always put support of our troops and returning soldiers above any support for illegal immigrants, unions and special interest groups. NO
I believe in merit pay for good teachers, charter schools and school choice with vouchers to allow competition to strengthen our public schools. YES
I believe we should eliminate any transportation money given to Massachusetts legislators who commute less than 35 miles each way to the state house. (Let them fund their own commute, just like normal working stiffs.). NO

5. Pro-family vs. pro-same-sex marriage
I define marriage as one man and one woman only, and you can take my word to the bank: WHENEVER I AM GIVEN A CHOICE, I WILL VOTE THAT WAY!
List me as pro-family (pro-traditional marriage). YES
List me as pro-homosexual marriage. Love is love. NO
I harbor no ill feelings towards anyone regardless of their race, religion, gender, sexual preference, clothing preference, etc. YES

6. Pro-Life vs. Pro-Choice
List me as Pro-life (pro-birth, pro-adoption, pro-support for pregnancy care, etc.). YES
List me as Pro-choice (pro-women’s rights to choose death for their unborn children, pro-Planned Parenthood). NO
I will oppose taxpayer funding of abortions in any and every venue and bill of any kind. YES
Defund Planned Parenthood (currently millions of taxpayer money is given to them): I will support diverting any current taxpayer funds from Planned Parenthood to abortion crisis centers that do not support abortion, but advocate birth and adoption. YES
I support my local church or pregnancy care center. YES
I believe that abortion should be extremely rare. YES
I believe that abortion is the deliberate killing of an unborn baby. YES

When do human beings begin to exist?
The baby becomes a person at the fetus stage, when the soul is deposited. Undeveloped, but a person, the baby begins to move around. To abort at that stage is cold-blooded murder. The soul is where the real person develops when it comes in contact with the world.

Until what point should a women be able to abort her baby?
At no point.

What reason did you choose that point?
I don’t believe that abortion should be performed at all, at any point,unless it’s necessary to save the mother’s life.

Have you ever had the opportunity to promote your views on these issues?
Yes, I have announced and discussed them on my TV programs at CCTV, in which I host and produce “The History, Community and Diversities of Muslim Americans in New England” and “Human Service News and Information” programs.

Finally, I believe marriage is something that is in accord with human nature, it can [not] be redefined by the state. Therefore, I ask for your votes and support because the job isn’t too big for me. Yes, I can win, so write me in.