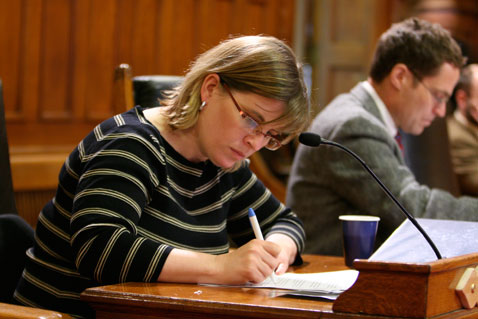 City Councillor Marjorie Decker was the clear winner in taking over the seat of retiring state Rep. Alice Wolf in a Thursday primary.

In unofficial primary results, city councillor Marjorie Decker was the clear winner in taking over the 25th Middlesex District seat of retiring state Rep. Alice Wolf, winning 2,754 votes to best Democratic competitors Gayle E. Johnson, with 294 votes, and Lesley Rebecca Phillips with 215. That means Decker got 84 percent of of the votes from participating Democrats and will face write-in Republican candidate Hasson J. Rashid in the November election.

If Tim Toomey wins again in the 26th Middlesex District, it raises the possibility Cambridge will have two sitting councillors who are state representatives.

Polls closed at 8 p.m. for the Thursday primaries, with Cambridge’s Election Commission — working out of the Central Square Senior Center — collecting the final votes from the city’s wards and precincts at around 10:17 p.m. Commissioners stressed that results from the 9,272 votes reflects only unofficial tallies and don’t include absentee ballots, which will be added to the tallies Friday. (The Cambridge Chronicle has a piece on “Low turnout for primary.”)

In a Democratic primary for the 24th Middlesex District,  David M. Rogers won with 501 votes, or 60 percent of the vote; the other candidates were tight — Robert Paul Reardon Jr. with 168 votes, or 20 percent of the vote, and Margaret A. Hegarty with 161 votes, or 19 percent. Rogers will face Republican Tommasina Anne Olson and independent Jim Gammill on Nov. 6. (See how parts of Arlington and Belmont voted — with Rogers winning with 2,291 votes total — here at the Globe.)

In the race for register of deeds for the Southern District of Middlesex County, the top vote-getter was lawyer and former health care administrator Maria Curtatone with 30 percent of the vote (2,125 votes) followed closely by Maryann Heuston, director of operations and training for the Cambridge Health Alliance, with 27 percent of the vote (1,928 votes). Robert B. Antonelli was third with 16 percent of the vote (1,087 votes), followed by Cambridge lawyer Frank Ciano with 12 percent (865 votes); former Newton mayor Tom Concannon with 8 percent (584 votes); and lawyer, real estate broker and Wakefield selectman Tiziano Doto with 6 percent (402 votes). (See votes from all affected communities — with Curtatone winning with 14,534 votes total — here at the Globe.)

Curtatone, facing no competition in November, looks to be the replacement for Eugene C. Brune, the former mayor of Somerville who has been register for 24 years.

In the Governor’s Council race, Democratic incumbent Terrence W. Kennedy faced Francis Xavier Flaherty Jr. and won with 62 percent of the vote, or  4,133 to 2,478. (See votes from all affected communities — with Kennedy winning with 23,703 votes total — here at the Globe.)

In the 5th Congressional District, to run against Democratic U.S. Rep Ed Markey: Tom Tierney got 92 votes, which in this case represented 42 percent of the votes cast, beating Jeffrey M. Semon with 73 votes, or 33 percent; and Frank John Addivinola Jr., who got 54 votes, or 24 percent. (See votes from all affected communities — with Tierney winning with 4,824 votes total — here at the Globe.)

Addivinola e-mailed a statement in the morning: “Even though the results of the yesterday’s primary are not what we hoped for, I came in second to Tom Tierney in a three-way race which would not be possible without motivated people who helped me.  While I am disappointed, I am definitely not discouraged and look forward to announcing my run against Markey in 2014 …  “While I respect the victor’s accomplishment in this race, most of us know that this candidate does not represent conservative ideas and advocates for higher taxes and Obamacare.  It is expected that he will not go after Markey’s record.  I wish him luck in his endeavors, but I am looking forward to re-entering the race for the next election and invite activists to become engaged in supporting me.”