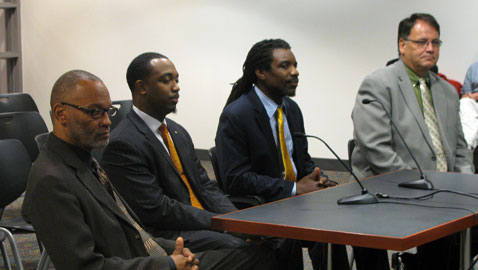 So there were some bus issues as school started this year. Bu there are always bus issues.

Otherwise, from how education officials describe it, the Innovation Agenda — which adds campuses, curriculum, teachers and administrators for middle schoolers to four existing Cambridge schools — is off to a great start.

“When you consider the magnitude of the change, it’s remarkable, and he reason it’s come together so well is a combination of hard work and good will,” Superintendent Jeffrey Young said late last week. “That’s by all the staff who’ve been involved as well as all the families involved, and the credit goes to them all. And to the kids themselves. In the end, if the kids are unhappy and not feeling part of something, it doesn’t matter what the adults think.”

The first week of school starting Sept. 4, in fact, was devoted to community building through discussion and field trips such as to the Harbor Islands, Young said. Each campus talked about core values in small groups, starting from grand ideas about the nature of social justice that led to the writing and adoption of a social contract endorsed by staff and students. At the end were presentations that explained what students “wanted their school to be and stand for, and what were the norms of behavior — what we want our community to be, and how we’re going to treat each other.”

Of course this would be necessary on campuses that were once K-8 but are now K-5 and “upper schools,” with the upper schools gathering sixth-, seventh- and eighth-graders from feeder campuses but still sharing facilities such as gyms and cafeterias. For Cambridge, it was a monumental change from a model the city has maintained for generations.

The schools will continue sharing facilities until each is renovated in turn and gets one for each age group, with The Martin Luther King Jr. School, at 100 Putnam Ave., coming first in line. The City Council unanimously approved a $81.5 million loan Sept. 10 for design, construction and other costs, with demolition beginning potentially before the end of the year and a renovated school due to reopen in September 2015.

A certain amount of flexibility on the part of students, teachers and staff was needed, said Fred Fantini, vice chairman of the School Committee. The physical fitness elective at the King Open School, for instance, drew a huge response — “almost everybody signed up,” Fantini said — and in response was changed to a two-day structure from a four-day structure so more students can attend. Similarly, a guitar teacher at the Vassal Lane campus was so inundated by student requests that he too had to scramble to add slots.

“There’s been a great flexibility in accommodating people,” Fantini said.

The scrambling to find space is more or less an intended consequence of the Innovation Agenda, though, the far edge of the success being seen in signups for drama and other music offerings. A big reason for the committee voting the agenda in was that schools were too small to pull off full orchestras or plays, and grouping middle schoolers solved that in sports as well: An intramural sports program by athletic director Chris Aufiero plans to stay within campuses the first year, pit schools against each other in the second and take on other districts in the third, Fantini said.

The schools do have their issues, mainly space issues resulting from the physical demands of the upper schools, he said, but that hasn’t led to tensions. “We haven’t had an incident since school started. You could drop a pin and hear it drop,” Fantini said, and even the K-5 schools suddenly have “a whole different atmosphere … I think we’ve created not just four new schools, but that all of our schools are new now.”

Young agreed. “I had great hopes that all these students would mix together and make friends and learn to study together and play together and live together. That was kind of the grand idea of all this, but until you actually see it happening you can’t help but worry,” Young said. “Our indications are that that’s exactly what happened.”

Fantini and Young indicated busing stood out as the biggest logistical problem of the switchover. Schedule and stop notices to parents arrived later than hoped because of “glitches in the mail and whatnot. Next year we’ll just do that earlier,” Young said. Adding the vagaries of traffic to that meant that especially in the early days “sometimes buses would be slower in arriving, kids are waiting at bus stops or parents would be waiting in the afternoon for the bus to drop them off. The machinery is not quite as, how shall I say it, well-oiled as it will be in the next weeks.”

The committee had extensive discussion of the issue at their first September meeting.

But there are transportation issues at the start of each school year that get ironed out over the first weeks and can be improved at the start of the next year, Young said.

One way that will be easier: There will be no huge, wholesale movement of people and equipment as there was this past summer. Eighty percent of teachers moved to implement the Innovation Agenda, Fantini noted, and Young went out of his way to add his thanks to custodians and maintenance workers to the other constituents for making that possible. “It was a heroic effort all summer, moving boxes, supplies and computers and all the trappings of a classroom and on top of that getting the buildings clean,” Young said.

It also appears that even parents opposed to the agenda have climbed aboard to make it work. Fantini reported getting a single phone call from a complaining parent.

The year isn’t over, however, and Young said a parent survey last taken in the spring will be repeated at the end of the school to assess how well the district has done in creating a school structure that satisfies all the constituents — and, of course, contributes to closing up the achievement gap that has bedeviled the district for decades under the old structure.