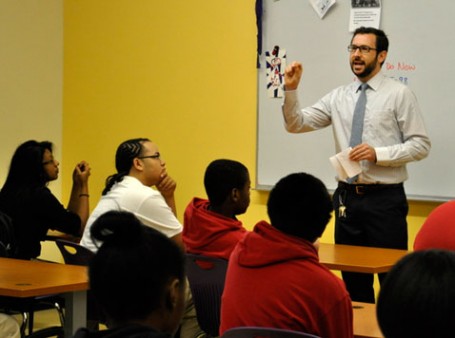 Cambridge’s public schools posted indifferent MCAS results last week, trailing statewide proficiency averages on the standardized test across most subjects and grades, often worse than state averages for students who need improvement or are failing in English, math and science and technology — yet also often exceeding state averages when it comes to advanced students and shining, in some ways, for urban school districts in new statewide accountability standards.

The advanced scores are good enough that the district as a whole beats the state averages in all three categories. But proficient students trail the state by at least four percentage points; those needing improvement track fairly closely across disciplines; and those failing are barely worse, except in the lesser-test area of science and technology, where the average is 13 percent statewide but 20 percent in Cambridge public schools.

The information as presented by The Boston Globe by grade and school is here. The state’s presentation is here and below; click on it to open a larger PDF version.

Meanwhile, accountability standards were changed by the state this year, forcing the district to adapt on the fly, and a promised press release and analysis by the district incorporating the new measurements remained unposted on its website as of Thursday afternoon. Whereas the goal was once for all students to be judged “proficient” by the 2013-14 school year, the new call is for districts to cut proficiency gaps in half by 2016-17. According to a Sept. 18 presentation to the School Committee, the “adequate yearly progress” measurement put in place by the federal No Child Left Behind Act of the President George W. Bush years has been replaced with a “progress and performance index” that lets improvement over time play a larger role in calculating the quality of educational efforts. It uses four years of data instead of one.

In addition, a “high needs” subgroup was created to avoid counting certain students repeatedly, and attendance was removed as a factor.

The index ranges from Level 1 — in which a school meets their goal for shrinking any proficiency gap — to Level 5, which is reserved for chronically performing schools.

“The news is pretty good … there has been years the news has been worse. Under this new system, there’s no other labeled urban school district at Level 1, and we’re the only Level 2 in the state. We have a couple schools that are Level 1,” School Committee member Marc McGovern said. “And all the districts that made Level 1 have very low percentages of low-income students and very low enrollment. Some of them have literally 100 kids in their entire district.”

The way committee member Patty Nolan interprets the data, the Cambridge Rindge & Latin high school “seems to be Level 2 only because some subgroups did not meet the 95 percent participation goal. Results were all above or at target.”

In the district, which has a dozen elementary schools, four schools new this year just for middle-school grades and the one high school, four elementary schools were labeled Level 1 for meeting educational targets, while the rest were put in Level 2 for missing some targets but not landing in the lowest 20 percent of the state, Nolan said.

Statewide, 552,549 public school students in grades 3–10 participated in 17 of the standardized tests, with the state’s Department of Elementary and Secondary Education identifying statewide improvement on nine of the 17. Students scoring “proficient” or higher improved in English-language arts at grades 4, 8 and 10; in math at grades 4, 6 and 10; and in science and technology at grades 5, 8, and 10.

From Nolan’s perspective, in Cambridge there “some excellent results and some areas of concern,” starting with gaps in proficiency for English-language learners and math results for black and low-income students, which are about 30 points lower than scores for white and Asian students and those from higher-income families. “In science and technology, the gap is even larger,” Nolan noted.

But she gave “huge kudos” to math educators at Cambridge Rindge & Latin, where results “rocked the socks off for every subgroup,” including special-needs and high-needs students, and spotted two seventh-grade classes that excelled in the testing. At The Cambridgeport School they were tied for No. 1 in English-language arts out of 473 schools, while The Amigos School was 11th in the state, and she identified a few other bright spots as well in an e-mail to parents, including growth in math at the Tobin, Morse and Graham & Parks Alternative schools and in English-language arts at the Cambridgeport and Haggerty schools.

The Kendall Square-based Community Charter School of Cambridge, meanwhile, was crowing about its 10th-graders placing tops in English and math among 348 high schools statewide, make the school one of only five state public schools, and one of three charter schools in the state where all 10th-graders scored advanced or proficient in both sets of skills.

The grade’s growth percentile was higher than 80 percent in math and English arts, the school said.

“I could not be more proud,” said Caleb Hurst-Hiller, the head of school. “What we are particularly proud of is the progress made by our students who, two and three years ago, were not performing well on these exams.”

Cambridge’s school district was also in the news this week for being singled out by Republican presidential candidate Mitt Romney in a discussion about education reform and teacher quality. Huffington Post quoted him from NBC News’ “Education Nation”:

When he was governor of Massachusetts, Romney said he plotted student performance against funding and class size. “The district that spent the most per pupil and had the smallest classrooms, Cambridge, those kids were in the bottom 10 percent,” he said.

“[Class size] turned out to be a factor, but not a big one,” Romney concluded. His revised answer to educational issues, now that he’s running for president: “We know the answer as to what it takes to fix our schools is to fix in great teachers.”

Romney served as governor for four years starting in 2003.