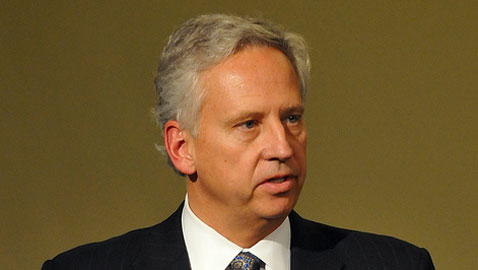 Bryan J. Koop, senior vice president and regional manager for Boston Properties, is due for a half-hour appearance at the East Cambridge Planning Team’s meeting Wednesday. (Photo: A Better City)

There’s plenty of reason to wonder if there will be a residential tower on Kendall Square’s Ames Street any time soon: It was recently revealed the tower literally can’t be built under current law; despite promises, it doesn’t show up in legal filings by developer Boston Properties; and Boston Properties has backed out of building housing in Kendall twice before.

Bryan J. Koop, senior vice president and regional manager of the developer’s Boston offices, may have answers, and he’s due for a half-hour appearance at the East Cambridge Planning Team’s meeting on Wednesday.

Usually, the face of Boston Properties is Michael Cantalupa, the senior vice president of development who works under Koop.

“He’s not in town, and we’re dedicating every other meeting [until January] to open space,” the team’s president, Barbara Broussard, said Wednesday in explaining how Koop came to be on the schedule instead of Cantalupa.

Koop is to share preliminary designs for the Kendall Square housing, although Broussard has been warned actual renderings aren’t ready to show.

“I know they’re not ready yet, but I said anything is better than nothing,” Broussard said. “I want people to understand they are working on the housing.”

The developer’s latest dangling of housing came in March in exchange for the right to replace much of a public rooftop garden with a two-story building connecting Google offices in 4 and 5 Cambridge Center.

While the residential tower has been described as holding some 186 units of various sizes (and possibly newly trendy “micro-units”), Boston Properties’ commitment to the city is not actually a promise to build. It says only that:

within one year after a certificate of occupancy for the Connector Building, Boston Properties will agree to submit for public review and comment a set of conceptual design plans for a residential building of approximately 200,000 square feet to be located on Ames Street.

Legal filings reviewed by resident Saul Tannenbaum finds no mention of such a project, only Boston Properties saying it “may in the future decide to acquire or develop additional residential properties.” A previous agreement obliges the company to pay the city if it does not build, but the fines are negligible in comparison with its typical annual revenue — $1.8 billion last year. (There is a $2.5 million penalty to Boston Properties if housing on Ames Street is not built, according to City Manager Robert W. Healy at an Oct. 19, 2012, meeting of the City Council’s Government Operations and Rules Committee.)

In August, Cantalupa acknowledged that the tower “was never buildable … We can’t build that building without further action by the city on zoning. It has everything to do with open space and a relatively long list of other things.”

Marjorie Decker, a city councillor who voted to let Boston Properties take away the garden and leads the council’s Housing Committee, said last month that she hadn’t been aware that was Boston Properties’ position.

“They have not said that to me when I have raised the issue,” Decker said, referring to Boston Properties. “I think it’s clear that the city expects them to build housing, and they should probably get on the same page and realize that’s what’s expected of them.”

This post was updated Nov. 18, 2012, with the penalty facing Boston Properties for not building housing on Ames Street and related analysis.