Boycott revs up against hotel, where so far it’s ‘business as usual’ 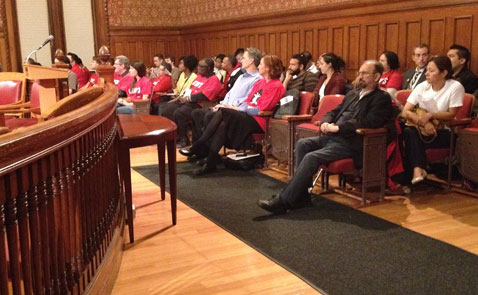 Boycott revs up against hotel, where so far it’s ‘business as usual’

Workers at Le Méridien Hotel wait their chance to speak during public comment at the Oct. 15 meeting of the City Council. (Photo: Marc Levy)

Le Méridien Hotel management said it’s feeling no impact from a boycott called by workers and city officials a little over a week ago, but a union official warns that it’s early yet.

Workers called Oct. 11 for a boycott of their own employer and appeared the next Monday before the City Council, where a ban on holding city events was affirmed unanimously by councillors. In addition to demanding such events as a biennial post-election celebration be moved from the 20 Sidney St. hotel, some also testified to putting a more personal stamp on their opposition to management’s practices, with vice mayor Denise Simmons saying she had stopped having tea at the hotel and councillor Tim Toomey saying he was telling people to take their business elsewhere.

It was councillor Ken Reeves, though, who led the charge against hotel practices. He said they resulted mainly from a reduction in work force to 70 from 100 when HEI Hotels & Resorts took over management at the hotel in 2007.

“I think this is a despicable practice,” Reeves said, linking the technique repeatedly to Republican presidential nominee Mitt Romney and his work at Bain Capital, the private equity firm he founded. “This is part and parcel of a national movement — I would say a national political party even — that there’s a [99 percent] and then the rest of the percent that’s going to stay rich on the backs of those they can squeeze down. Cambridge should stand up and say, ‘We understand this, we understand that workers have rights, we do not believe that anyone who had one job should suddenly have four or five jobs at the same income’ … I don’t think the city should spend a nickel there until they return to a good work environment.”

In addition, Harvard is pulling out of HEI, an investment fund that manages 46 properties in 16 states to ensure the success of its portfolio, when its current $70 million investment matures, and The Harvard Crimson reports that the university’s April decision follows similar ones by Princeton, Yale, Brown, the University of Pennsylvania, Cornell, Vanderbilt and Swarthmore. The Massachusetts Institute of Technology, which has no funds with the company, is being asked by workers to stop recommending Le Méridien or use it as a “preferred,” discounted vendor, The Tech says.

None of this is affecting the hotel, said Ryan O’Heir, its general manager. There has been no drop-off in customers.

“We’re business as usual,” O’Heir said Tuesday. “Our associates are working as hard as always.”

The dispute stems from the wishes of some workers — what HEI calls “associates” — to take a vote to see if a majority want to join a union and their desire for management to sign an official declaration it will not harass or intimidate workers into rejecting a union or even refusing to vote. “They’re looking for card-check neutrality, and we don’t think that’s the best thing for our associates,” O’Heir said. “We’re certainly supportive of our associates’ right to organize if that’s what they want to do, [but through] secret-ballot election. The boycott stems from the fact we want to go that route.”

The rules HEI wants to follow allow lengthy appeals that can draw out a vote up to five years while providing minimal awards even for a employee winning a case of being fired for organizing, said Brian Lang, president of Local 26 of the Unite Here union. Signing an agreement for card-check neutrality, on the other hand, is described by Lang as creating “a process where it is much easier to build a genuine partnership.”

Local 26 has a document that has worked well for 15 hotels in the Boston and Cambridge markets since 1998, Lang said, resulting in processes that have raised the number of unionized institutions to 27 and includes such marques as Westin, W, Hilton, the Commonwealth Hotel and Nine Zero.

Lang warned that while Le Méridien may be doing fine only days into a boycott, “I think what they’re feeling is anticipation at this point,” Lang said. “The boycott will be very aggressive and systematic. We’re reaching out to institutions that use the hotel up and down Mass. Ave. to advertise the boycott, and on the campuses of Harvard and MIT.”

Employees, meanwhile, stay on the job, despite testifying Oct. 15 to the increasing hardships of their work when HEI took over, converting to a Le Méridien from the Hotel @ MIT brand. They told of earning $13.98 per hour to clean 16 or more rooms in a shift, of dishwashers getting 8 cent raises after a year and 11 cent raises after a second year of work and of people dropping health care insurance so their kids would qualify for free MassHealth coverage.

“Some of these allegations just aren’t true,” O’Heir said Tuesday. Earlier he’d sent the council a letter saying no one from the city had contacted the company for its side of the story, which “we would have been very proud to tell,” including a series of bulleted points with some oddly phrased accomplishments. “We have increased employees’ earning potential by almost 18 percent over the past four years,” is one; touting a company wellness initiative in which 2,000-plus employees “are working to achieve personal commitments toward improvement of their well-being in tangible ways” is another; a “9 percent reduction in lost-time accidents” is a third.