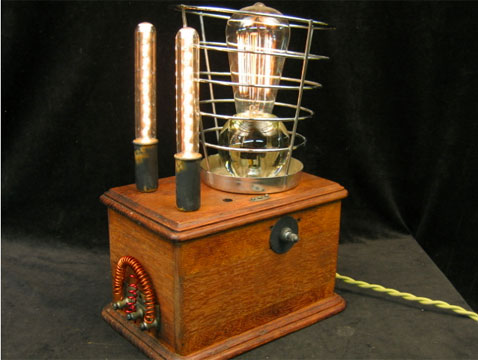 The Diabolical Box No. 12 is among the Steampunk wares designed and sold by Chris Osborn at CIty Lights Antique Lighting — even after the storefront closes.

After four decades, City Lights Antique Lighting and its antique chandeliers and wall sconces are leaving Massachusetts Avenue, heading to the Web with a strong sideline in the owner’s new love: his custom, retro-futuristic Steampunk-style fixtures.

“I hope to have more time to do the Steampunk, if anything,” owner Chris Osborn said Friday. “One of the motivations is to do more. It’s a lot of fun.”

While sales at the 2226 Massachusetts Ave., North Cambridge, storefront weren’t as strong as they could be, there was another factor that helped convince Osborn to move out after 37 years in business — his wife’s mail-order business moving out of the basement of their Cambridge home. That means Osborn and his workshop could move in, running a scaled-back operation that he said would include working directly with designers, an Etsy shop, selling via Ruby Lane, online Steampunk sales and traveling to Steampunk and craft fairs.

He called this his “semi-retirement.”

Osborn, with his American and European antique lighting hardware, glass shades, restoration service and focus on Aesthetic movement, Rococo, French Empire, Art Deco and Victorian styles, had been in business for more than three decades before he stumbled on Steampunk, which melds high-tech with a Victorian sensibility.

In May 2010, he came into some old work lights — the kind bolted to sewing machines and lathes back when there was a lot of lathe work being done here — and started readying them for sale, attaching gears and wheels so they could stand on their own, as well as selling components for a style he’d always known as “New York Industrial.” But he found the style had become known worldwide as Steampunk.

He explained the attraction in a January 2011 blog post:

I still make many simpler form-following-function lights, but I cannot resist the lure of invoking the aesthetic of a time when, unlike today’s digital gadgets with all their functions hidden inside microscopic silicone brains, machines looked like machines.

After running a sale to encourage clearing out the storefront, City Lights will start packing up around the first of the year and should be empty within a month, Osborn said. The biggest discounts are on floor lamps and larger chandeliers. He’s also selling store furniture, but asking to keep it on hand until the final closing.

“I feel lucky I can do this,” he said. “I’ll still be in business, but doing small stuff.”

The store closing was first reported by Ron Newman on the Davis Square LiveJournal.