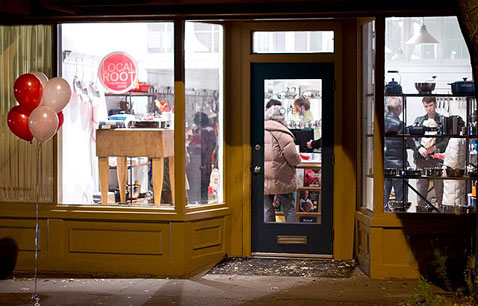 Cambridge Local First businesses are in the midst of their sixth annual “Think Local, Thank Local” campaign, in which some of the money raised by shoppers through Friday goes to On The Rise, a local organization that helps homeless women.

The weeklong campaign began Plaid Friday — the small-business competition for Black Friday, which comes the day after Thanksgiving.

The 36 participating businesses get help promoting the effort from street and storefront signs, as well as other media, organizers said. But independent business owners went into the season expecting good news.

A survey of 1,768 independent business owners by the national nonprofit Institute for Local Self-Reliance said more than three-quarters of respondents said consumers were becoming more appreciative of locally owned businesses — especially when there were programs such as Cambridge Local First in place. For local retailers, holiThrogday sales growth last year was 8.5 percent in communities with buy-local campaigns and only 5.2 percent elsewhere.

“We’re anticipating that this trend will continue this year,” said Stacy Mitchell, a senior researcher at the institute. “Many signs suggest that overall support for independent businesses continues to grow and that more people are seeking out local stores for their holiday shopping.”

In addition to giving much of the credit to the buy-local campaigns in place in more than 100 U.S. cities, she credited national campaigns such as Small Business Saturday, which is supported by American Express.

Shoppers were expected to spend $5.3 billion on Small Business Saturday but spent $5.5 billion, American Express said. Some 67 percent of consumers planned to take part, the National Federation of Independent Businesses said from survey data, a figure given separately as being about 100 million people — about the same as last year. (This is the third year for the event, but data are sketchy.)

On The Rise officials describe it as an organization that “offers a safe and welcoming community to homeless women in our local area. The organization offers resources to the most in-need women in our community, and aims to move them out of homelessness, and empower them to improve their lives.”