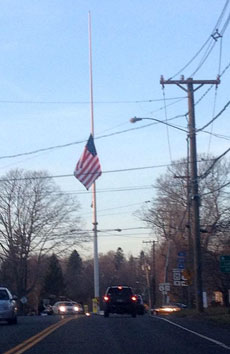 Several people were tweeting this image Friday, describing it as an image of a flag at half-staff in Newtown, Conn., in reaction to that morning’s school shooting.

“We can’t help but question whether that could happen here in Cambridge,” Young wrote in an afternoon e-mail. “While we all realize that the world has many dangers that children and adults navigate around every day, I want you to know that we in the Cambridge Public Schools make safety our highest priority.”

Daily precautions include locking school buildings at entry points after the morning drop-off time, requiring visitors to be buzzed in by the main office and deployment of safety and security personnel, including Police school resource officers, he said.

“Still, as we all know, no safety precautions can be 100 percent perfect. This is why all of us must be vigilant at all times, aware of our surroundings and willing to report anything that seems out of the ordinary, even something as ‘routine’ as an unlocked door,” Young said.

Young also addressed the slayings in Newtown head on:

Today, this weekend, and in the weeks and months ahead, let us send our thoughts to our neighbors in Connecticut and around the world, in communities where violence has shattered an otherwise peaceful existence. Let us also resolve to do all we can, as individuals and as a community, to protect our precious children.

When information began circulating about the shooter, identified as Adam Lanza, some in the educational community worried that a diagnosis on the autism spectrum would color how others with autism are seen. Mark Gardner, affiliated with the Cambridge Parent Advisory Council on Special Education, forwarded this message from the Autistic Self Advocacy Network:

Our hearts go out to the victims … it is imperative that as we mourn the victims of this horrific tragedy that commentators and the media avoid drawing inappropriate and unfounded links between autism or other disabilities and violence. Autistic Americans and individuals with other disabilities are no more likely to commit violent crime than nondisabled people. In fact, people with disabilities of all kinds, including autism, are vastly more likely to be the victims of violent crime than the perpetrators. Should the shooter in today’s shooting prove to in fact be diagnosed on the autism spectrum or with another disability, the millions of Americans with disabilities should be no more implicated in his actions than the nondisabled population is responsible for those of nondisabled shooters.

Other Cantabrigians were hard hit on a personal level.

Comedian Deana Criess Tolliver found herself drawn to her daughter’s gymnastics class, describing herself as “watching so much joy, feeling so much joy that she is safe,” but being unable to think of the killings in Connecticut. “It makes the heartbreak so much stronger,” she said. “I don’t know how a parent ever gets over losing a child. Certainly not the way so many lost theirs today.”

“Now to try and stop sobbing on the sidelines of this gymnastics class,” she said. “I look like a crazy person.”

Another mainstay of the ImprovBoston comedy club retweeted a comment by the comic Jim Gaffigan. Asked as “a father and a funny comedian” to “say something to make us feel better right now,” Gaffigan — who said he’d already contacted his state representatives to call for more gun control — gave a terse, thoughtful response: “We shouldn’t feel better.”

Journalist, artist and documentary filmmaker Beena Sarwar passed on a note that Friday was also the 19th anniversary of a shooting in Aurora, Colo. — not the summertime theater attack that killed a dozen people and hurt 58, but one that killed three teen employees and an adult manager at a Chuck E. Cheese’s — and an essay by a survivor. “So much sadness and distress fills me because it will never make sense to the survivors, the families, the friends, the family of the killer,” Russell Foltz-Smith said in the essay.

Since the Columbine massacre of April 20, 1999, which killed a dozen students and a teacher, the United States has had 31 school shootings, while there have been only 14 in all other countries combined since that time, Sarwar said.

“The way to honor these dead children is to demand strict gun control, free mental health care and an end to violence as public policy,” she said.

Michael Angelakos, of the band Passion Pit, said he woke up Friday to the “terrible” news.

“My heart goes out to all involved. Sorry, but the Second Amendment is clearly not working in our country,” he said.

There is a crack in the American psyche and it’s filled with ammunition.

President Barack Obama responded at about 3:30 p.m. Friday from the White House, saying tearfully that he felt “overwhelming grief” at the attack and the slaying of children between 5 and 10 years old.

“As a country we have been through this too many times,” Obama said, seeming to suggest gun control measures were called for. “We’re going to have to come together and take meaningful action to prevent more tragedies like this, regardless of the politics.”