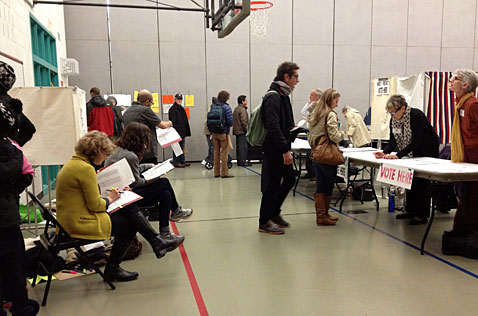 Voting takes place in the gymnasium of the Maria L. Baldwin School in the Agassiz neighborhood, with voters lining up downstairs leading to a school common area. (Photo: Marc Levy)

With the Newtown, Conn., school shootings fresh in mind, city officials took a step Monday toward cutting off one way such an attack could happen in Cambridge: closing schools on Election Day and keeping students home.

In a broader discussion about how well city polling places handled the record numbers of voters Nov. 6, and potential improvements, city councillor David Maher added school safety as an issue, since many polling places are in public schools. “In light of what we just saw, I would hope that between you folks in the administration, the Police Department and Election Commission, you could get together to ensure if there is access to a school it is limited and there is plenty of protection,” Maher said.

City Manager Robert W. Healy had expected the concern and was ready with an answer. He had already met with Superintendent Jeffrey Young and was working toward making future Election Days also professional development days for faculty, meaning schools wouldn’t be in session and students wouldn’t be around as residents lined up to vote.

That is how Somerville does it, said Tim Toomey, a councillor and 26th Middlesex District state representative for both cities.

“That sounds like a good plan to me,” Maher said, noting that rooms holding polling places can be secured easily only in some of the city’s schools.

The larger issue of election concerns was referred back to Healy for more information by the council.

With President Barack Obama up for reelection against Republican Mitt Romney, Cantabrigian and Harvard professor Elizabeth Warren running for U.S. Senate against Republican Scott Brown and a wide range of other ballot questions and contested races, the number of voters this year hit 50,749, tripling numbers seen at some of the city’s 33 polling places during municipal races. There were long lines at many, especially in the morning and evening from people trying to vote before after work, and Ken Reeves recounted getting a call from fellow councillor Marjorie Decker to get to polling places to plead with voters not to leave in frustration.

At least two polling places had wait times of up to an hour for as many as 1,599 voters, despite there being eight or 10 booths available, according to an Election Commission chart included in Healy’s report. Others saw wait times of 45 minutes or a half-hour, with wait time not always corresponding to how many people lined up. At one polling place in the chart, 2,102 waited up to  45 minutes to vote, while elsewhere 2,077 waited only up to a half-hour.

“I would have preferred turning over on a pillow and thinking the Election Commission has this,” Reeves said.

As a result, Healy’s dismissal of spending more on voting equipment because the numbers seen this year were an aberration didn’t satisfy Reeves or others, who wanted specifics about that potential spending.

“Where are the details about what the costs are?” Reeves challenged Healy.

Among those who were dissatisfied were Leland Cheung and Decker, who suspected the voting numbers from Nov. 6 weren’t tied to that one Election Day and the Obama vote, but were more likely the result of the Warren campaign for Senate – and could be replayed imminently with the appointment of U.S. Sen. John Kerry to secretary of state, opening the way for a special election that could include Brown running again to fill Massachusetts‘ other Senate seat.

With Decker headed for her own state representative seat in the 25th Middlesex District, Reeves said he hoped she would help ease the way for early voting or other ways to put less pressure on polling places. Toomey said such measures are already on the table – although he didn’t directly address the checkout aspect of Massachusetts voting, which is unique in the nation.

“We’re asking for more of an engaged response,” Decker said, asking for a more specific rundown of the challenges and costs of meeting each in returning the matter to Healy’s office. “That’s the information this council wants, not that ‘It might be too expensive.’”