Alden & Harlow will replace Casablanca, with focus on food, nod to history 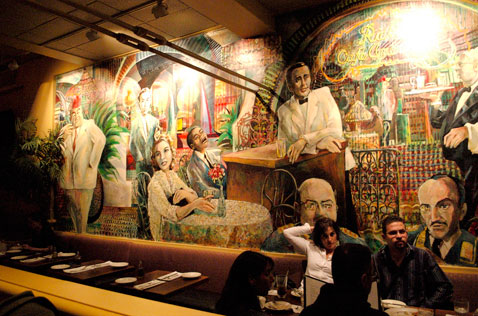 Alden & Harlow will replace Casablanca, with focus on food, nod to history

Omar’s famous murals will be moved from the Casablanca restaurant to neighboring Brattle Theatre, said the owners of the coming Alden & Harlow eatery. (Photo: Prehensile Eye)

The Harvard Square space that was Casablanca for 57 years will take on a name looking back even further: Alden & Harlow.

That’s the name of the restaurant Michael Scelfo announced Tuesday to the License Commission, describing a food- and service-driven restaurant he hopes to open this summer, perhaps at the end of July, after the owner of the building renovates.

“I have a lot of respect for Sari [Abul-Jubein] and Casablanca as really being kind of a luminary on the food map in Cambridge for many decades,” said Scelfo, who will be owning his first restaurant after being chef at Russell House Tavern and Temple Bar. Even his menu at Alden & Harlow will include “subtle tips of the hat to what was there before,” he said.

“The name itself is a nod to the history of the building and to what’s come before,” he said. It refers to the architects of 40 Brattle St., built in 1890 and home to the Brattle Theatre, Cafe Algiers and, until late December, Casablanca, the Mediterranean-themed restaurant that started as a bar for the college crowd in 1955.

The restaurant’s famous Omar murals were to be donated to the Brattle Theatre in another nod to the historic nature of the restaurant, said Scelfo and his “sounding board,” adviser and technically junior partner Brian Lesser. With Storyville, Sweet Cheeks Q and several other ventures under way, Lesser told commissioners he would still be a helpful presence for Scelfo as well as 40 percent owner of Alden & Harlow.

The menu is to be locally focused, seasonal and even changing by the day, Scelfo said, with dishes served in a variety of sizes and ranging in price from around $9 or $10 to a high of $25 or $26. With an intense focus on customer service, Scelfo and Lesser plan to hire around 100 staff, starting with 30 servers for the 191 seats and standing room for nine. “There’s going to be a lot of customer attention as people come in,” Scelfo said, and near-constant training in such things as pairing wines with meals.

No live entertainment, he said, and not much focus on the bar. This is a place for solid, honest food, free of hooks and buzzwords, and also for those who want a full menu open late: From Sunday through Wednesday, diners can order as late as midnight; Thursdays through Saturdays, as late as 1 a.m., with a 2 a.m. closing. Alden & Harlow is intended to open with a 10 a.m. to 2 p.m. Sunday brunch, add a Saturday brunch and finally lunch, the partners said.

The presentation to commissioners described it as “a pretty humble kind of a concept, just good, clean, honest food.”