More enforcement against out-of-town taxis is on the way, officials say 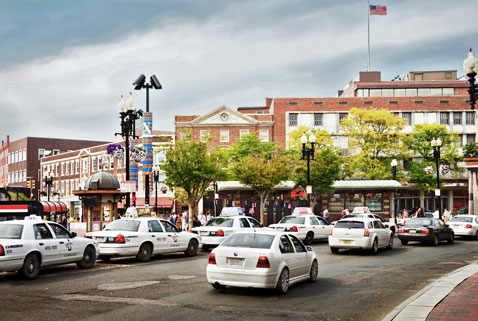 More enforcement against out-of-town taxis is on the way, officials say

Taxi drivers pleaded for the city’s help Monday in keeping out-of-town cabs from picking up their fares illegally.

While a unanimously adopted policy order led by city councillor Leland Cheung might ordinarily take months to get action, an official said Tuesday that in this case a response is already under way.

The city manager might have a report on how to tackle the problem by the next council meeting, said Corey Pilz, consumer information specialist for the Cambridge Consumers’ Council. Details were withheld until City Manager Robert W. Healy has a chance to review and unveil them, potentially at the council meeting scheduled for Monday.

But the changes can’t come too soon for the taxi drivers, who had ideas of their own on how to handle the problem.

“We’re asking Cambridge police to try to stand by us. What I feel and other drivers feel is that the police ignore us,” said Ziad Hamdan, who lives in Malden but has been driving a cab in Cambridge for almost 13 years. “Boston police [protect] their drivers.”

Dave Shirzy, a driver from East Boston, agreed that police play a larger role in enforcing taxi laws in Boston, even though the city has a larger pool of hackney officers as well. “If I go to Boston, it’s not just the hackney officers, but even the Boston Police officers working a detail will whistle to let us know they’re watching us,” Shirzy said. In Cambridge, drivers are on their own in confrontations that, especially recently, have been known to get abusive or even violent.

Boston police officers ticket out-of-town cabs more aggressively and are merciless in forcing drivers to spend a day in court to defend themselves against $500 for even borderline offenses, said driver Yahia Ali, who lives in Stoneham.

Meanwhile, cabs are coming in to Cambridge from as far away as Quincy and Revere, said another driver, Eric vin Berg, and growing increasingly brazen in their illegal pickups, pulling up to Cambridge cab stands or even driving dangerously to cut off Cambridge cabs steering toward a fare.

“We’re coming to the city of Cambridge looking for help from the police to enforce the regulations and actually ticket these cabs and fine them, and not let them off,” von Berg said. “They’re stealing our work and making it much more difficult for us to earn a living.”

Driver Michael Gervaise, of Somerville, was more direct in blaming the License Commission for not creating a safer atmosphere among drivers and cab companies in Cambridge, where drivers might get their tires slashed or windshields smashed by other in the industry for complaining.

“Please, I implore you, take the next step,” Gervaise told the council. “You guys know where the real problem’s at.”

Out-of-town pickups are illegal, but are a problem no matter what city you’re in, Pilz said. The law against them is hard to enforce, considering the size of the city and that “there’s only so many resources we have to do it [and] it’s so hard to monitor.” Seeing a person hail an out-of-town cab is one thing, he pointed out, but enforcement gets muddied because it’s legal for someone in Cambridge to call and request that an an out-of-town cab come get them.

The city has been known to have police officers help Szeto with undercover operations, a technique drivers may be on guard against because they’re used in cities such as Boston as well.

“We have been successful to some extent,” Pilz said of citywide enforcement efforts. “Possibly not as well as we should be.”