In strike against safe sex group, Boston College creates its own Catholic mystery 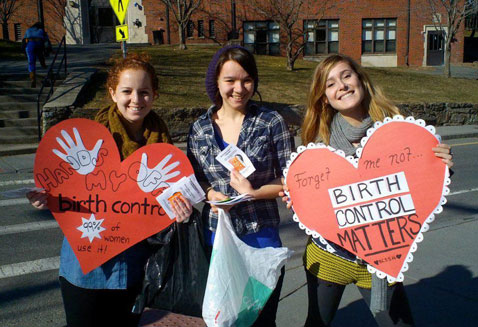 In strike against safe sex group, Boston College creates its own Catholic mystery

Boston College has threatened to take disciplinary action against BC Students for Sexual Health. (Photo: BCSSH)

Boston College has threatened to take disciplinary action against a student group that promotes safe sex and provides condoms to students because that organization’s agenda is deemed diametrically opposed to the university’s Catholic affiliation and mission.

Okay, I get the rub, but why now? It’s not like condoms on campus are anything new, and I can guarantee you they have been a staple of BC dorm life since before the Miracle in Miami or even the heroics of Jack Concannon – so again, why now? One can only guess that a devout parent or alum with deep pockets got wind of the existence of the BC Students for Sexual Health’s Safe Sites and raised a stink. Or maybe the recent election of a pope got the Jesuit juices flowing in Chestnut Hill and they wanted greater religious sanctity on campus, which would be ironic; the tenor from Vatican City, where the swirl of sex abuse cover-up still hangs in the air, was a more humane and contemplative one, one that seemed even willing to reevaluate the administration of old-world tenets in a rapidly changing world.

No matter what BC’s impetus, in the bigger scheme of college life in which a “Spring Breakers” mentality commingles with pious sanctity, it just seems unwise to forcibly close down Safe Sites given that the downside is an increase in unwanted pregnancies and STDs.

And let’s keep in mind that BC, as an institution of higher learning with a religious affiliation, invites people of other faiths, or no faith, to come to its campus to hone their minds. It likely has a code of conduct students should adhere to, but given its diverse makeup, a new trend compelling its non-Catholic populace to be subject to the ethics of the Catholic Church might have long-term ramifications. The balance of religious obligation and administration of higher education is a tough one. Other institutions, such as Brigham Young University and Notre Dame, must struggle with it mightily, especially when it comes to recruiting student athletes to a top sports program with an arduous army of alumni backers and big TV contacts.

The problem here is that BC has created its own media firestorm. Had its officials reached out to Safe Sites or simply ignored them, life would carry on just the same as if they truncated the safe sex group, because sex and condoms will still happen no matter what.

Sex has always been tricky for Catholic Church. Critics have widely asked: Why not accept the provision of condoms and safe sex in poor and AIDS-riddled parts of the world such as Africa? Or how can one be so righteous in the face of sex scandal after sex scandal? The Church and BC, at their core, seek to do good. Their missions are to help others and they do do much to improve the world through charity, education and outreach. But sometimes the tendency to cling to tradition in a changing world can become a shackle.

One does not need to surrender one’s principles or traditions, but one does need to be pragmatic.