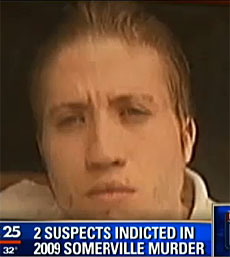 Victim Christopher Souza, 24, is shown in a screen capture from Fox News.

A Somerville man has been charged with murder in a 2009 strangling, Middlesex District Attorney Gerry Leone said today.

Michael Barnett, 32, was indicted by a Middlesex Grand Jury on charges of murder, armed robbery and witness intimidation for the Nov. 22, 2009, death of Christopher Souza, 24. He will be arraigned in Middlesex Superior Court on a date yet to be scheduled.

Souza’s body was found by his mother Nov. 23, 2009, with several cords wrapped around his neck. His Xbox and Playstation video game systems were missing, a detail that wound up being key to the investigation.

According to authorities, Barnett wanted to buy drugs Nov. 22, 2009, but didn’t have any money.  He went to Souza’s apartment late that evening, stealing the Xbox and Playstation systems and strangling Souza to death with cords from the game consoles. He sold the Playstation for $50.

Police tracked the IP address of the Playstation and contacted the buyer who had activated Souza’s online account. The buyer said he bought the game system from Barnett, police said.

Recent news coverage of the case helped generate leads in the investigation, police said. The local Fox channel took credit for renewing interest in the case by broadcasting a feature about it as an unsolved crime.

“Thanks to a committed and persistent team of investigators and prosecutors, coupled with new public awareness of this previously unsolved case, the Middlesex District Attorney’s Office obtained new evidence that helped lead to the indictment of the defendant for this senseless strangulation murder,” Leone said. “I applaud the commitment of the Somerville Police and Massachusetts State Police to investigate this crime and work to bring justice for Christopher and his family.”

Barnett’s girlfriend, Kelly Murray, 32, of Somerville, has been charged with two counts of witness intimidation for lying to police during the investigation, authorities said. She was arraigned in Middlesex Superior Court on Friday, when Assistant Clerk Magistrate Matt Day ordered her held on $5,000 cash bail with conditions to stay away from any witnesses and comply with conditions of probation on an unrelated case.