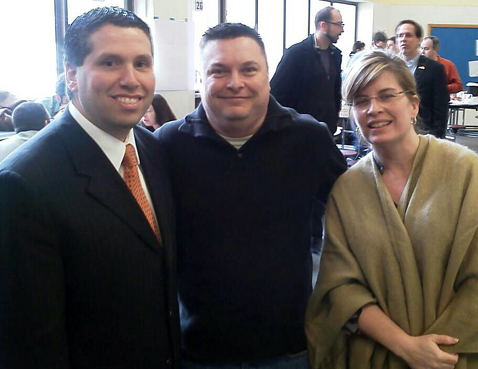 Eight-year School Committee member Marc McGovern held his official declaration of candidacy for City Council at a Tuesday night party at Tavern on the Square in Central Square.

He enters a likely very crowded field for the Nov. 5 election with a couple of key endorsements. One is primarily a coup of sentiment – that of former School Committee member, city councillor and mayor Frank Duehay.

“Marc McGovern will bring the same vision, balanced judgment and deep knowledge of Cambridge to the City Council that he has shown on the School Committee. His colleagues and the public will respect and listen to him as the council sets new guidelines for growth and change for the Cambridge of the future,” Duehay said.

“I am truly excited that Marc has decided to run for City Council. He has worked and advocated for families on the margins for his entire career and his tireless dedication to the community will make him a true leader on the council,” Decker said.

There are nine seats on the council, and only Decker’s is certain to be open. Several people have said they are running for council, though, including Michael “No Money” Connolly, who ran last year in the 26th Middlesex District race for the state House of Representatives; Tom Stohlman, an architect active in city politics; Logan Leslie, a veteran of the U.S. Army Special Forces and Harvard University student; Luis Vasquez, a nonprofit worker and blogger for the Cambridge Chronicle; and Kristen von Hoffmann, sustainability manager for the school district.

Residents have typically until the end of July to file nomination papers for their candidacy.

McGovern recently acknowledged to The Cambridge Chronicle that he was running, saying he’d been encouraged by family, friends and supporters to pursue Decker’s seat. “I believe that my experience on the School Committee, and as a social worker – collaborating, problem-solving and advocating – would be valuable skills to add to the council, and I can’t think of a better way to serve the community I grew up in then to be part of the larger conversation about how to move Cambridge forward,” he told the paper.

McGovern, a social worker, was born and raised in Cambridge and attended its public schools, graduating from Cambridge Rindge & Latin School. He has served four terms on the School Committee, elected vice-chairman twice by his colleagues and serving as budget co-chairman three times and representative for collective bargaining twice. His biography also cites a quarter-century of volunteerism with community organizations ranging from youth sports to the Cambridge Kids’ Council to progressive causes around the city and state.

“As someone who works in the human services field, I have seen Marc’s commitment to some of the most vulnerable and at-risk children and families in our city and state. He truly understands the families of Cambridge and the need for affordable housing and services to ensure everyone’s needs are being met,” said Judy Perlman, a resident, public school parent and housing advocate cited in a press release from McGovern for his announcement.

For information about McGovern and his campaign, visit marcmcgovern.com or email [email protected].