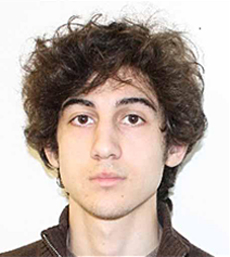 Dzhokhar A. Tsarnaev is a suspect in the Monday bombings at the Boston Marathon and more recent violence.

Only two hours after calling off the area’s high alert tonight, police were in the midst of a standoff with a suspect in Monday’s bombing of the Boston Marathon and another marathon of violence and tension that began Thursday night with the killing of an MIT police officer. And at 8:44 p.m. Friday, the news came: The suspect was in police custody, and soon to be transferred to an ambulance.

Meanwhile, The Boston Globe was reporting that three people connected to a suspect in the bombing, which killed three and injured 176, were being taken into custody in New Bedford.

Dzhokhar A. Tsarnaev, 19, was holed up in a boat in a Watertown yard, where some conjectured he has likely been for much of the day, covered in blood, as thousands of law enforcement personnel searched for him block by block and home by home.

Police believe Tsarnaev and his brother Tamerlan Tsarnaev, 26, of Norfolk Street near Inman Square, shot MIT campus police officer Sean Collier, 26, at about 10:20 p.m. near Kendall Square and took a stolen car into Watertown while shooting and throwing explosives at pursuing police. In Watertown, Tamerlan Tsarnaev was fatally injured; he died at Beth Israel Deaconess Hospital as Dzhokhar Tsarnaev escaped into the darkness and MBTA Transit Police Officer Richard H. Donahue Jr., 33, was in critical condition at Mount Auburn Hospital after being shot.

Some 200 rounds had been fired in the gunfight late Thursday and early Friday, Gov. Deval Patrick said at a press conference. The chase and search lasted from 11 p.m. Thursday to 6 p.m. Friday.

The dinghy into which Dzhokhar Tsarnaev apparently crawled to nurse his injuries was just outside the 20-block perimeter police set up to search, officials said.

It was at about 6:10 p.m. the Friday ban on businesses, MBTA use, taxis and use of city streets was lifted, with police vowing a continued presence in Watertown.

Dzhokhar Tsarnaev was believed to still be in Massachusetts, said State Police chief Col. Timothy P. Alben, but “We can’t continue to lock down an entire city or state.”

At 7 p.m., as Watertown residents were returning to their homes, shots were heard again, the suspicion was confirmed and the media quickly learned a body had been found on a boat near a three-unit condominium.

The risks at the end: That Dzhokhar Tsarnaev was wearing an explosive “suicide vest” like his brother, and that there was some 40 gallons of gasoline aboard the boat.

Ultimately, the suspect surrendered after discussion with a police negotiator, people cheered and police began shaking hands – and relaxing for the first time in a day. A crowd gathered along Mount Auburn to cheer the police cruisers and EMT vans as they passed, tweeted Jeff Howe of Northeastern University’s Media Lab.

In New Bedford, the Globe said,

New Bedford Police Lieutenant Robert Richard said his department assisted federal investigators in executing a search warrant at a home on Carriage Drive in New Bedford, about 10 minutes from the campus of the University of Massachusetts at Dartmouth, where Tsarnaev was a student.

Richard said the FBI took two men and a woman into custody. “They appeared to be either fellow college students or fellow residents,” he said. Richard said Tsarnaev may have been affiliated with the home on Carriage Drive in some way – possibly having lived or visited the house.

Mayor Jon Mitchell told The Standard-Times Saturday morning that the three people detained by the FBI Friday evening in connection with marathon bombing suspect Dzhokhar Tsarnaev had been released.

The two college-aged males and one college-aged female were detained by the FBI following a raid at the Hidden Brook apartment complex Friday evening. The complex entrance is at 42 West Hill Road, south of Interstate 195 and between Route 140 and Hathaway Road.

On Friday, Lt. Robert Richard told The Standard-Times that the students were believed to be fellow students or roommates of Tsarnaev, who is a registered student at UMass Dartmouth.

Coverage of the burst of violence that took the suspects from the Stata Center at the Massachusetts Institute of Technology to a Watertown manhunt – and the false lead that muddled media reports – is here. Follow-up coverage of the suspects and how the police action moved back to Cambridge is here.

This story was updated to reflect more recent information on the three people in New Bedford.