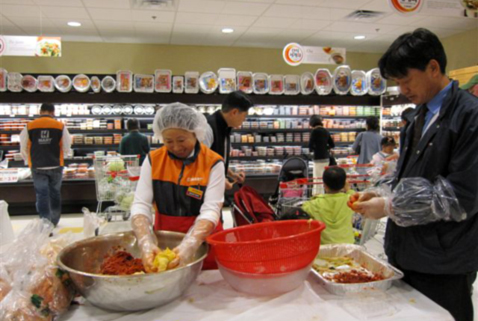 Workers at the H Mart in Burlington show how to make kimchi. (Photo: Debra Samuels)

The H Mart grocery store and food court projected to open in Central Square as soon after renovations as February might not open until the winter, city councillors said Monday.

The reason: The company and landlord failed to alert Nstar the store was coming, along with power needs beyond what could be provided by the area’s electricity infrastructure. “What we learned from Nstar is that they do not build capacity in advance of there being demand – they won’t build preemptively, but in response to a building permit being pulled,” councillor Leland Cheung said.

The costs of adding a substation and transformer at the 18,000-square-foot space at 581 Massachusetts Ave., once home to the Harvest Co-op Market and Clear Conscience Cafe, could hit up to $450,000, Cheung said, including the switchover from a temporary system for construction. The same equipment will serve “future development” by 3MJ Realty at the site.

The New Jersey-based chain of “Asian-inspired” supermarkets started in 1982 in Queens, N.Y., as Han Ah Reum, which means “One arm full of groceries” in Korean, but changed its name to H Mart in 2002 when it opened its 19th store. It’s built 26 since, including a Burlington, Mass., store in 2009.

Nstar needs as much as a year to provide power appropriately to a business such as H Mart, including purchase and delivery of transformer and switchgear equipment that can take four to six months “or longer,” said Bill Zamparelli, the power utility’s community relations and economic development representative, during an April 2 committee meeting led by Cheung. Without H Mart’s power needs, the electricity infrastructure in the Central Square area runs at about 70 percent capacity, city electrician George Fernandes told the committee.

Even a potential September opening looks unlikely, said councillor Ken Reeves, who visited H Mart in Burlington and talked with officials about various “complications” such as the placement of trash receptacles.

“Maybe by November,” Reeves said of an opening date.

“We’re about to get a wonderful market that has a breadth of offerings that is mind-boggling and prices that are good. And the market is very much looking forward to coming to Cambridge, they want to be a part of the energy and activity that we have here. It’s a very good thing that’s on its way,” Reeves said.

The company was looking at the 5,000-square-foot former Blockbuster site at 541 Massachusetts Ave., now slated to be home to a revived ManRay nightclub, 3MJ Realty’s Morris Naggar told The Boston Globe in June, but “jumped at the chance” to take over the larger site when lease changes had Harvest moving across the street. The cafe closed.

Mayor Henrietta Davis, who also visited the Burlington store, acknowledged that even in its 18,000-square-foot space the Central Square H Mart would lack some of the offerings of the larger sites, such as a live-fish counter – but, she said, “When it comes, it’ll be worth the wait.”

The problem at H Mart points to a larger issue for the city, namely the significant amount of development coming to Central and Kendall squares as the result of the so-called K2C2 rezoning process. With new residences, businesses and office and lab space coming to the neighborhoods, power needs could increase greatly. Cheung’s Cable TV, Telecommunications and Public Utilities Committee explored the issue in depth at the April meeting.