‘Pain & Gain’: Michael Bay gets you rethinking a rep as studio-incubated hack 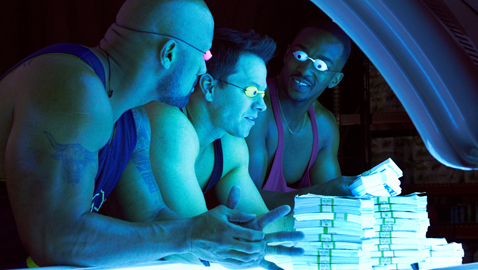 ‘Pain & Gain’: Michael Bay gets you rethinking a rep as studio-incubated hack

“Pain & Gain” documents the American Dream gone amok in another Day-Glo Miami. Think of Tony Montana in “Scarface” and imagine comedic inepts such as Stan and Laurel wielding the Uzis and machetes and calling the shots. It’s not a pretty picture. One worthy of a few laughs perhaps, until you consider it’s based on a true story.

Mark Wahlberg’s reliably effective as Daniel Lugo, an ex-con with jacked pecs, a silvery tongue and a tank full of big ideas. He starts out thinking small: Build a following at a niche middle-tier gym as the happening trainer; move in for a cut. Not a bad plan, and Daniel is a pretty amiable chap, but then he starts thinking of short cuts. One of his clients (an uproarious Tony Shalhoub, who at times seems to be channeling Joe Pesci from “Goodfellas”) made it big in unscrupulous ways and shares all the ins and outs with Daniel. There’s also an omnipresent TV guru (Ken Jeong) espousing get-rich-quick schemes, and somewhere in the middle a kidnap and extortion scheme is hatched.

To ensnare Shalhoub’s Victor Kershaw, a tough Columbian Jew, Daniel enlists fellow pump-monkeys Paul (Dwayne Johnson) and Adrian (Anthony Mackie). Paul’s done time but has since cleaned up and found Jesus, while Adrian lives to “get big,” though he’s taken too many ’roids and has penis problems, leading to hilarious interludes with Rebel Wilson as a plump, potty-mouthed nurse who relishes injecting a big needle into Adrian’s flaccid wiener. 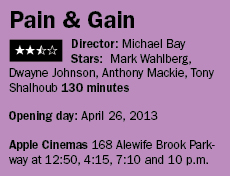 The film’s an amazing change of pace for Michael Bay, who has made his own reputation for spectacle and thudding sensory overload. Think of the literal brass balls dangling from a gigantic robot in “Transformers: Revenge of the Fallen,” or such testosterone-fanning anthems as “Armageddon” or “The Rock.” Then there was his well-meaning but inert history lesson, “Pearl Harbor.” In short, Bay’s a box-office golden boy and a studio-incubated hack, but “Pain & Gain,” has me rethinking that.

The pretext is promising enough, but when matters turn bloody and the authorities (and the venerable Ed Harris as a private investigator) jump into the mix, “Pain & Gain” falls into a flat true-crime news magazine story. It’s also too bad too that it goes on a bit longer than it probably should. But I’ll tell you this: The next time I see Bay’s name on a film, I won’t think only of Megan Fox, insipid pandering and a massive metallic pair of big ones.