‘Francis Ha’: Loose and breezy, yet pointed and true on how adults are made 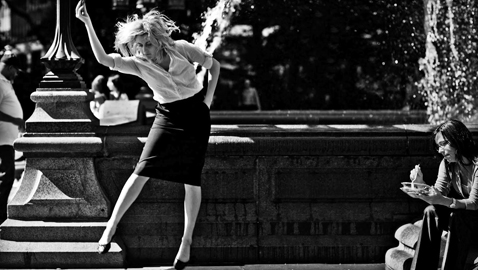 ‘Francis Ha’: Loose and breezy, yet pointed and true on how adults are made

“Francis Ha,” the intriguing and endearing new film from Noah Baumbach, is an amiable urban fable about finding one’s self through the most passive aggressive means possible. There’s little action and it’s chock full of fluff, talk, mundane interludes and ennui. Think the French New Wave or “Before Sunrise” and that series’ subsequent installments by Richard Linklater and you’d have the right idea. 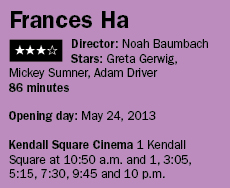 Talk is cheap on the big screen, but it’s hard to do it well. The casting and chemistry has to be just right. Linklater seems to be in on the secret, as is Jim Jarmusch, and “My Dinner with Andre” might be the epitome of all the talky, no-action excursions that grip and hold with every syllable. Of course Woody Allen’s scope was much bigger, but his Manhattan classics (“Manhattan” and “Annie Hall”) were perfect synergies of quirky comedy, barbed witticisms, phobia and an undeniable spark with leading lady Diane Keaton.

Baumbach, who announced his arrival among the ranks of neo auteurs such as Paul Thomas Anderson and Wes Anderson with the bold dysfunction-dissecting “The Squid and the Whale,” has a newly kindled relationship with Greta Gerwig, who plays the eponymous Frances. (Baumbach was formerly married to Jennifer Jason Leigh, whom he directed with Nicole Kidman in “Margot at the Wedding.” He later helmed Gerwig in “Greenberg” and again here.) The two wrote the script together, and his affection for her is evident as his camerawork, in lush black and white strokes a la “Manhattan,” follows her rudderless-but-hopeful 20-something on her quest for meaning and a future.

The setup is simple: Francis breaks up with her boyfriend arguably to maintain the apartment she has with longtime friend Sophie (Mickey Sumner), but Sophie moves in with her Wall Street beau and Frances is left adrift in a living situation, “undateable,” as one of her ephemeral flatmates calls her, and her career as a ballet dancer is tenuous at best. She’s an understudy at a small ballet company, which is intriguing because Gerwig is a woman of stature and not your prototypical ballerina. It becomes a perfect, if unintentional, metaphor for her character’s awkward quest to fit in and find her roost.

Frances couch hops for a while, and when funds dry up at the company she takes on more menial work. The one remarkable thing about Frances is her affable demeanor and unwavering outlook. She floats, but she has hopes and desires. If she can’t cut it as a dancer, she’ll be a choreographer. Her small failures are palpable, as is the pain that accompanies them that she so delicately holds inside.

What drives the film mostly isn’t Gerwig or the sharpness of dialogue, but the odd arrangements Frances drifts into and her mercurial relationship with Sophie. As their lives go in opposite directions jealousy and disdain spark occasional pettiness, revelation and redefinition. The bond between the two and its evolution becomes a chronicle of moving from that mushy undefined time after college and into adulthood. “Frances Ha” may have a loose and breezy texture, but the human experience underneath is pointed and true.