‘Before Midnight’: Third in lovable series takes some work, like any relationship 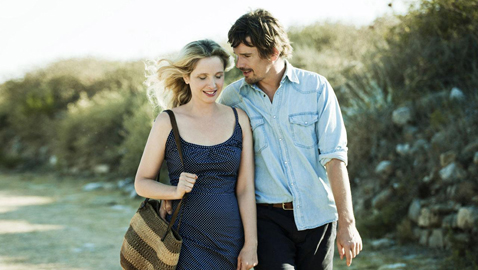 ‘Before Midnight’: Third in lovable series takes some work, like any relationship

People say marriages are work, but the reality is that relationships are work and, married or not, they become more work when you add kids to the mix. Such is the situation in which we find Jesse (Ethan Hawke) and Celine (the ever graceful Julie Delpy, who bares all, or most, for her art). It’s now another nine years since they reconnected in Paris in “Before Sunset” and have produced a set of curly-haired twin girls – who put zero strain on the couple, as they are always asleep or being watched by others. But Jesse, as we learn in a mini shocker, also has a preteen son and a problematic ex-wife, and to add to matters Celine has been offered her dream job in Europe. Driving through the Greek countryside on a family getaway, the debate du jour becomes whether Jesse should move to Chicago to be a positive influence on his son, who is going through a rough patch, and should Celine take the job, and, if so, should they collectively move to Europe? 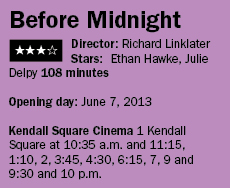 Most people would envy such heavy choices, but this is the third (and perhaps final) episode of Richard Linklater’s “Before” series and another cheeky exercise in endless talk, philosophical what-ifs and passive self-indulgence, which isn’t bad, mind you, it’s just not a real thing for most people.

I’ve never been big on Hawke, but I can’t see these films working without his involvement and collaboration with Delpy and Linklater. Their chemistry is untouchable. Everything they cook up is simultaneously pretentious and natural. Total fluff and deeply insightful. In short, it’s riveting.

But the reality is, these films appeal only to highbrow art-house romantics (I count myself among their thin ranks), and the proof is in the numbers. The films cost $2.5 million, $5 million and $10 million to make, respectively, and the first two grossed about $5 million each in U.S. theaters.

Much of the cost must go to shoot the sweeping European vistas and travel expenses. The cast surely must get a nice vacation out of it. “Let’s go to Rome, be hip extensions of our personas, pretend to be in love and soak up the culture while the camera rolls.” Sounds good to me.

In “Before Midnight,” we get a bevy of additional players that never intervened in the previous films (it was always just Jesse and Celine). Celine and Jesse are staying at the villa of a Greek novelist who is a mentor of sorts to Jesse, and part of the reason for the trip is to help Jesse incubate ideas for his next novel. Other family and friends join in and gather for a feast and bawdy conversation about love, literature and sex between sips of sparkling wine, nibbles of grape leaves and belts of Ouzo. Such leisurely enjoyment and philosophizing fills much of the second act.

The Celine and Jesse walking and taking bit comes later, after diner and heading toward the hour of the title when they saunter off to a suite in a quaint inn gifted to him by their exceptionally generous hosts. At the moment of romance, both want to know if they still love each other like that magical night they had 18 years ago in Vienna (“Before Sunrise”), when youth and possibility and love extended the night to a near eternity of electric verbal sparring and bliss. But the conversation turns bitter. There are ebbs and flows of meanness and compassion and, it shockingly turns out, we are watching two cerebral adults act like petulant children.

There’s a frustration here that’s not in the other films. The question’s not “Will they get together?” anymore, it’s “Will they stay together?” Some inspired role-playing and insights coupled with earnest revelations and concessions balance things out, but in the end, I’m not sure I was as in love with Celine and Jesse as I was 18 years ago, or even nine.

Like any relationship, it requires work, even from the viewer’s side. Hopefully I’ll be able to check in in another nine and renew my vows.