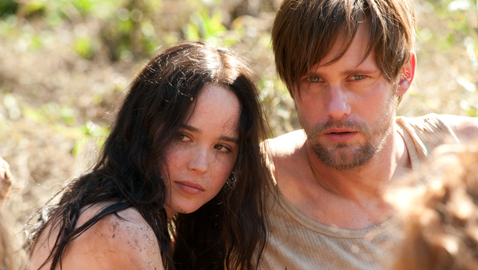 The second collaboration between writer/director Zal Batmanglij and writer/actress Brit Marling is a lot like their first, “Sound of My Voice,” only flipped on its head. In that thriller Marling played the adored icon of a cult (she alleges to be from the future) that gets infiltrated (or close enough), and in “The East” she plays an espionage expert who infiltrates a cult to thwart their anarchistic activities. 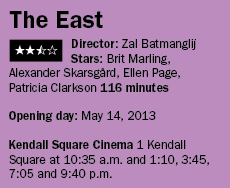 The premise of a wonk working for a private intelligence firm to protect corporations and the like from social terrorists, unscrupulous competitors and till-fleecing insiders is intriguing and builds nicely at the onset. It’s just the mechanics and fruition that get the pink slip.

Marling stars as Sarah, whose current and coveted assignment is to embed with the eco-terrorist group of the film’s title and stop them before they harm one of her firm’s clients. From an early clip we know what The East is capable of, as team members slip into the Long Island manse of a big-oil exec and flood the air and water systems with the black gunk that wreaked havoc down on the Bayou – The East’s de facto creed being “an eye for an eye.”

Who Sarah’s client is, she doesn’t know, and in one of the film’s more compelling moments, when she’s on the phone with her boss (Patricia Clarkson) and tells her of The East’s next target (a plant dumping toxins into the water of the surrounding town, spurring cancer in kids) the higher-up calmly tells Sarah that it’s not their client and to maintain the asset – in other words, let the shit go down, even if someone dies. The notion of the mighty dollar trumping justice is nothing new, but stands out in this context, as does the delicate balance Sarah maintains between her covert and regular life. Her live-in boyfriend thinks she’s on a business trip to Istanbul when she’s just across the state line Dumpster diving with freegans and laying with The East’s mastermind (Alexander Skarsgård, looking like a young Viggo Mortensen).

Marling is an interesting actress to behold, simultaneously alluring and bland with clear turquoise eyes and a long aquiline nose that melds seamlessly into her forehead. It’s hard to tell if her far-away demeanor is an extension of her persona or an ingenious thespian concoction. Having also seen her in “Sound of My Voice” and “Another Earth,” and knowing that she helped write her characters, I’m guessing the former.

By design her Sarah is supposed to undergo some sort of transition, a crisis of conscious, if you will, and a turning from the corporate world she so long strived to be a part of. But with such heavy political issues as environmentalism, corporate greed, terrorism and privacy crowding the corners – corners the filmmakers neglect to explore – the stark juxtapositions, conflict of loyalties and sense of self-direction that the film shoots for feels trite, disingenuous and tacked on. It’s unfortunate too that such accomplished actresses as Clarkson and Ellen Page (as an East member) also get lost in the postured plot shuffle.

To their credit, Marling and Batmanglij do cook up some titillating concepts, rife and promising, but maybe if they were less concerned with a zippy plot payoff and more about the heart and soul of those torn between ideological ends they would find another world beyond conceit and the conventional.