‘This is the End’: Cheap, funny movie that missed development hell, shows the result 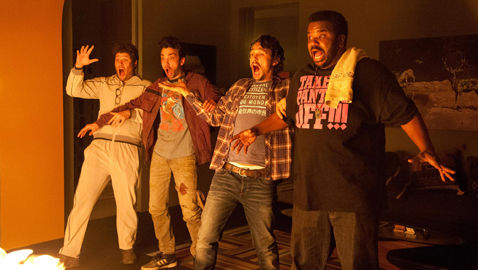 ‘This is the End’: Cheap, funny movie that missed development hell, shows the result

“This is the End” may be the most meta vanity project ever to come out of Hollywood, where things meta usually don’t fly unless Charlie Kaufman is involved. The film, co-written and co-directed by Seth Rogen, has Rogen playing Seth Rogen, or the asshole extrapolation of himself. James Franco, Jay Baruchel, Craig Robinson, Jonah Hill and Danny McBride all do the same. Baruchel is the out-of-towner visiting Rogen in Los Angeles. Baruchel despises L.A. and just wants to hang out and smoke weed and watch 3-D TV, but Rogen pries him off the couch and drags him to a house party at Franco’s manse. 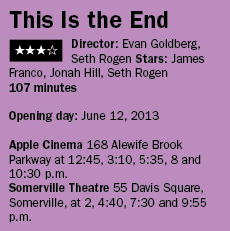 Pot humor and pop-up party guests such as Rihanna keep the slow-moving premise (Baruchel also hates Hill and is a bit of whining wet noodle to boot) alive, though there are nuggets of WTF humor that snap you out of the stupor, including Michael Cera (yup, the anemic, sweet wimp from “Juno”) doing blow and getting a rim job in the bathroom while sipping an effete cocktail he seems to relish more than the sex act.

If that’s not an apocalyptic vision, the real apocalypse comes. À la the Rapture and Judgment Day, “good” people are sucked up in blue tractor beams and the middlers and miscreants are left on Earth to perish in a mounting inferno. No one at Franco’s party gets beamed up, to say the least, and, as the hills of Hollywood burn, it takes a while before the revelation sets in. When it does, the sinkhole from hell (literally) opens up and takes all but the main lads.

The film, which was ostensibly birthed by the 2007 short film “Jay and Seth Versus the Apocalypse,” gets its teeth from its self-deprecating nature. When wondering if they’ll be saved, one of the insightful lot remarks, “They always save actors and famous people first.” One of the film’s wittier turns has Franco breaking out the videocamera from “127 Hours” and the boys making a cheeky, low-fi sequel to “Pineapple Express.” Things that don’t work so well are the heavily peddled spoof of “The Exorcist.” (Its dull, uninspired flatness will leave your head spinning.)

Outside creatures that look like the minions of the gatekeeper in “Ghostbusters” or some rubber costume baddie in a Scooby-Doo episode are tearing up the turf. Eventually the posse must venture out, and when they do the scale of special FX won’t wow you so much as make you wonder how such a hokey skit idea stretched into a feature-length film got such big dollars.

“This is the End” won’t get you any deeper into the personas on display, no matter how you feel about them, but it will make you laugh (and test your patience a bit too).