‘World War Z’: Flesh-rippers come at you fast, and so does this globe-racing flick 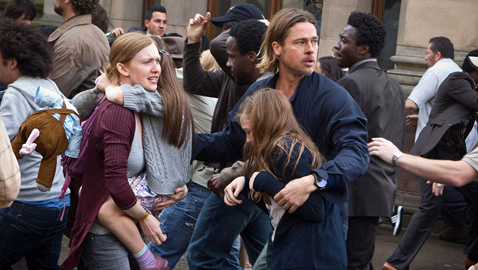 ‘World War Z’: Flesh-rippers come at you fast, and so does this globe-racing flick

Zombie apocalypse and anything vampire seems to be the hot ticket out of Hollywood these days. The subtext that we prey on each other and that life is a precious and fragile thing is a piquant notion that gets magnified to its fullest when examining how man comports himself as civilization crumbles. 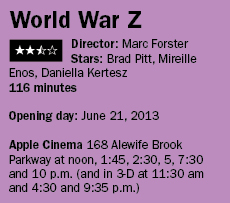 Sans rules and with limited resources, what would you do? Snatch and grab, help out or hole up doomsday-prepper style?

That’s the special sauce that makes any apocalypse-cum-horror flick grip the road. Real people, supernatural horror, deep shit. George Romero’s seminal “Night of the Living Dead” was more about the dynamics and dissent among a band of survivors barricaded in a farmhouse than it was about the throng of shambling flesh scratching at the walls. Decades later, guys such as Danny Boyle (“28 Days Later”) and Zack Snyder (the 2004 remake of Romero’s “Dawn of the Dead”) got the nifty idea to make the dead move at warp speed.

Speed kills, and given the choice in “Jurassic Park,” who would you really want to face, T-Rex or the velociraptors?

“World War Z” does zombie on a grand scale and goes at the genre in new ways, even if the rabies outbreak that is transforming people to flesh-ripping berserkers is similar to the rage virus that fueled the “28 Days Later” series. You get bitten and in seconds you’re one of them, a maniac on angel dust spreading the disease. The decayed, mangled weak-kneed dead in Romero’s tales and TV’s “The Walking Dead” have nothing on these Olympic athletes.

The outbreak comes suddenly and fast as Gerry Lane (Brad Pitt, who snatched up the rights to Max Brooks’ 2006 book) and his family suffer a Philadelphia traffic standstill and a wave of the rampaging infected sweep through, shattering windshields with their heads, chomping and biting and increasing their numbers. It’s a terrifying beginning of the end.

Gerry, it turns out, is a recently retired UN operator who was adept at getting in and out of such hellish hotbeds as Liberia and Bosnia. Those survival skills keep the family alive for a night in a Newark housing project. To get the family out and onto the safety of a flotilla of military vessels off the coast, Gerry has to agree to get back in the game. Bureaucracy and governments are eroding all around the world and so Gerry, a SEAL team and a Harvard-educated biologist set out on a viral forensics mission of sorts to find a cure. The journey sends them to Korea, Wales and Israel, where a Middle East flashpoint of contention has seen this coming and taken all their settlement walls and set them outward facing.

The globe-hopping plot drops Gerry in one harrowing situation after another – I’m not sure what was more unsettling, the transformation of coach class on an airliner into a neck-biting brood or being trapped in a World Health Organization laboratory (a veritable maze) with dormant undead at every turn. The script and Pitt play Gerry right, though: He’s not a can-do skull basher, he’s a thinker and a plotter – susceptible, vulnerable and human, more MacGyver than Rambo.

The film, directed by Marc Forster (who’s been all over the map with “Monster’s Ball” and a Bond credit) does an effective job of rendering the world-spanning terror. The scenes of broad carnage – that Philly traffic jam and the scaling of the wall in Israel by a zombie flesh ladder, which must be some type of spin on the Tower of Babel – are astounding in scale, authenticity and the seamless blend of FX and live action. If the story bogs down, it’s in its disjointedness. Each stop along the way feels like a chapter written by a different author, and that would be correct; the script credits require more commas than I care to entertain.

The end too comes quick. It’s rushed, and a bit of a groaner to boot. And there’s not enough screen time for Mireille Enos of “The Killing,” who plays Pitt’s wife and the mother of their two daughters. The family tie binds the film nicely, and Forster and Pitt hold it from going over and into cliché and hyperbole. The result is lithe and agile, and intrinsically eerie enough to keep your stomach pinned to the back of your throat throughout.