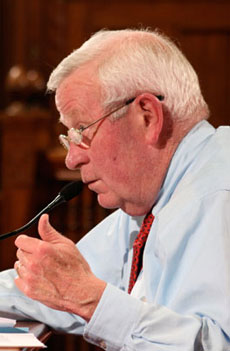 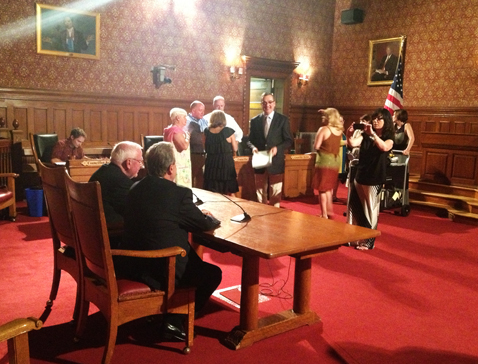 It wasn’t the typical. The city manager’s agenda, which Healy would normally have presented immediately after public comment, was moved to the end of Monday’s three hours and 45 minutes – the last before the council’s two-month summer break and Healy’s June 30 retirement after 32 years in office.

Then, when the city manager’s agenda finally arrived, city councillor Tim Toomey used his “charter right” power to set all the items aside until next time.

“I just want to take this opportunity to thank the city manager for his many years of service to the city. It will be my intention to give him a nice going-away gift,” Toomey said. “I’m going to charter right the remaining items.”

The next 45 minutes were turned over to councillors expressing their gratitude and appreciation to Healy – and listing his accomplishments – and Healy, in turn, giving one of the last in a series of goodbyes he’s been delivering to the city he’s led since July 1, 1981.

He quipped that keeping him sitting until the end of the meeting was the council’s revenge for his “39 years of not air-conditioning this chamber” (including his years of work in Cambridge before becoming city manager).

“But actually I wanted to do it deliberately,” Healy said. “It’s kind of hard to realize: This is the last time I’ll be sitting in this chair. It may be somewhat overwhelming, and I need to keep it on the light side.”

On that lighter side, he noted that he and Toomey didn’t “cabal” over canceling the 10-item city manager’s agenda for the night, although Toomey did ask him if he would mind. Healy, in fact, found the symmetry pleasing: At his first council meeting decades ago when he expected to be hired there he saw his first charter right applied – bewildering him at the time – and it came from the person who occupying the seat Toomey has now.

In the years since, councillors noted, Healy had overseen tremendous changes in the city, including the modernization of the police and fire departments, the remaking of Danehy Park and an ongoing sewer separation project, the creation of University Park and turning of Kendall Square into, as one councillor tweaked a common claim, “the most innovative square mile in the universe,” support for early childhood education, affordable housing and the Cambridge Health Alliance, maintenance of a low crime rate, the lowest tax rate and highest possible bond ratings, commitment to environmentally sustainable construction and a string of well received capital projects ranging from youth centers and a water treatment center to the Cambridge Main Library, high school and the new police station that bears his name: the Robert W. Healy Public Safety Facility.

On Monday, councillor Leland Cheung put forward a policy order to not just commission a portrait of Healy, but to have it installed in the newly renamed Robert W. Healy Jr. Executive Suite – the until now unnamed offices where Healy, longtime Deputy City Manager Richard C. Rossi (who has a three-year contract as city manager starting July 1) and their staff work.

Not everyone was enthralled with the idea. Resident James Williamson, speaking during public comment, called it an overreach. “We already have a shiny new police station that actually at the time was rather controversial [for being] named the Robert Healy building,” he said, noting also that “Mr. Healy has been the beneficiary of an extremely generous compensation package over the years, enhanced recently, including a very generous retirement package of $336,000 a year plus whatever the additional benefits are. I presume that Mr. Healy’s not going to be hurting if there isn’t a portrait of him.”

There were six city managers before Healy since Cambridge installed its Plan E charter and the city manager form of government in 1938, with those just before Healy came along lasting less than three years in the office. His tenure – longer by far than even the longest-serving city councillor – allowed his pay to grow to $336,317 in 2010, which has been identified as more than double the salary of the next-highest-paid municipal leader in the state.

The pay and retirement package has been attacked and defended over the years.

“I think we could have a moment of truth here tonight in the City Council that you could acknowledge that there are many people in the city who do not feel they have not been well served or have been unhappy about various decisions that have been made over the years and the manner in which they were made,” Williamson said, pointing to a series of discrimination lawsuits lost or settled by the city as well as commercial real estate developments and “lack of genuine participation” from residents.

Comments at a recent council Civic Unity Committee hearing also described Healy as having little interest in hearing from average citizens, especially those with differing points of view.

Most, though, were in a mood to honor Healy on Monday. The president of the Association of Cambridge Neighborhoods, Gary Dmytryk, took time from his comments about a Kirkland Street development and urging passage of an anti-glare zoning petition to wish him well, and politics watcher Robert Winters said he was speaking at his first council meeting in at least six years to thank Healy “for all he’s done for the city.”

Healy, 69, a Lowell resident – while a Cantabrigian as a child, his parents were forced to move to when they couldn’t afford to live in Cambridge – will not be far away, at least initially.  He starts a fellowship at Harvard on July 30 as a fellow at the Taubman Center for State and Local Government and the Rappaport Institute for Greater Boston, meaning for a while longer he will be a common presence in the city that councillor Craig Kelley says he often finds people describing as “paradise.” (And at one of the two institutions, Kelley said, to which Healy often humbly ascribes Cambridge’s success, the other being the Massachusetts Institute of Technology.)

Councillor Minka vanBeuzekom called him “professor Healy” and promised to buy his textbook at the Harvard Book Store, while Cheung promised to visit him at Harvard’s Kennedy School and keep learning from him.

“Thirty-nine years is a long time to come to work every day in the same building,” Healy said, before getting his second standing ovation of the night. “I’m now prolonging it. I do want to say thanks to everybody, everybody who’s here, and I know with the Bruins on there’s isn’t a lot of people out there watching this to say goodbye to – but if there are, goodbye and thank you.” 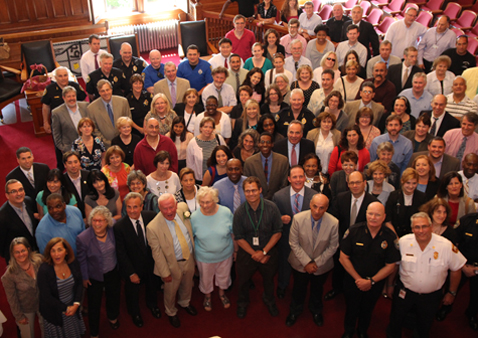 Employees say goodbye to Healy, seen in the front row, at a June 20 ceremony at City Hall.