‘The Heat’: Feig’s funny, filthy-mouthed buddy cops are going to clean up Bahston 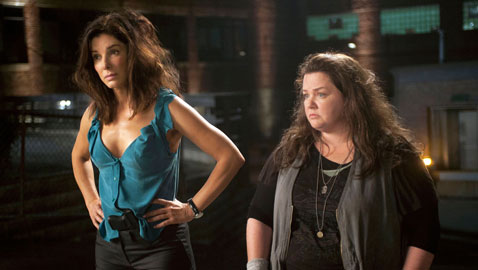 ‘The Heat’: Feig’s funny, filthy-mouthed buddy cops are going to clean up Bahston

“The Heat” is funnier than it should be. Part of that’s because director Paul Feig has a way of taking flimsy ideas and strong comedic actors and creating lightning in a bottle. He did it with Melissa McCarthy and Kristen Wiig in “Bridesmaids” and does so again here. If there’s any doubt that it’s more the actors than Feig, I’ll simply point to McCarthy’s recent woeful outing in “Identity Theft.” It’s not so much what he does with the material but the chemistry he educes between his stars and how they build something infectious from thin setups. 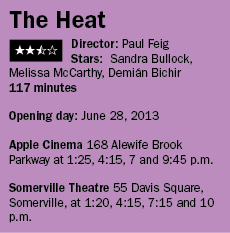 The premise behind “The Heat,” which was shot in in our glorious city of Boston, though it doesn’t look so much like the Boston you and I know, is pretty much the same old comedic cop buddy story popularized by Eddie Murphy and Nick Nolte in “48 Hrs.” and later by Mel Gibson and Danny Glover in the “Lethal Weapon” series. Except here, the oddball pairing is women and the focus is more on the funny than the dark and grim, though people do get shot in the head enough and blood does spurt.

Sandra Bullock puts in a willing and able effort as FBI Special Agent Ashburn, bouncing from nerd to sexpot and even drunkard. Ashburn’s a by-the-book agent seeking a promotion, but ego, arrogance and lack of people skills stand in her way. To get ahead she’s got to nab a faceless drug king in Boston, and to do so she must do it with the aid of a portly and potty-mouthed detective (McCarthy) with less people skills than herself. McCarthy’s Mullins takes a long time to warm up to, because like her hacker in “Identity Theft,” she’s insensitive, overbearing and uses the F-word to qualify everything. It almost tanks the movie early on, but the friction with Bullock’s straightlace heats up fast.

Mullins is one mean dog; there are few perps on the street or colleagues in her precinct willing or able to tangle with her. It’s her brother (Michael Rapaport), who’s a small fish in the local drug trade that is her Achilles heel and wound of sensitivity.

The hijinks come mostly when Mullins and Ashburn wind up in some nightspot. One scene has the pair at an upscale club where they are trying to bug an underling of the drug lord and have to sex it up to get close (“You’re the hottest woman over 40,” a slick-haired baddie notes of Bullock), and later the duo bond in an Irish dive bar where Bullock and McCarthy dance poorly to lost ’90s classics, down gallons of shots and form a conga line of septuagenarians.

The funniest kicks, however, come from Mullins’ family. The Bahston accent is right on, the house is decorated with velour dunking/home run/touchdown Jesus paintings and SNL legend Jane Curtin plays the tough-as-nails matriarch. The whole drug lord angle is just an excuse for Mullins to make jokes about Ashburn’s unused loins and Ashburn to respond with lines like “that is a gross misrepresentation of my vagina.” What’s not to like about Felix and Oscar toting guns and fueled by estrogen? It ain’t heavy, and it ain’t sharp, but it is funny and Feig does it all on a half a tank of gas.