‘The Way, Way Back’: Sweet coming-of-age comedy with little, little too much in it 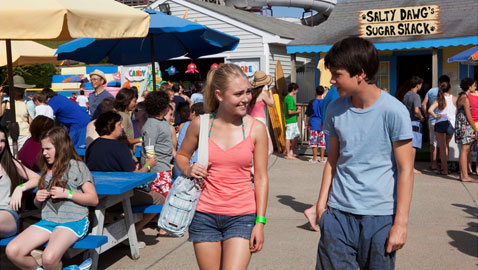 ‘The Way, Way Back’: Sweet coming-of-age comedy with little, little too much in it

“The Way, Way Back” is the kind of summer comedy that throws enough curveballs at you to make what’s old new again. A tad dark around the edges and sophomoric in the middle, it’s a sweetly affecting coming-of-age drama with flourishes of Wes Anderson and even the Farrelly brothers, which should be no surprise; it’s co-written and co-directed by Nat Faxon and Jim Rash, the pair who, along with director Alexander Payne, got an Oscar for penning the droll George Clooney comedy “The Descendants.” 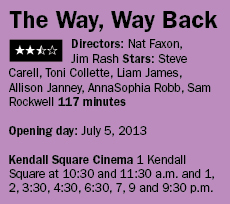 The surprise here is Steve Carell, who plays against his usual big-screen persona as a feckless nice guy and is more like his irritable jerkwater boss on the NBC series “The Office.” His Trent, a middle-aged divorcee, decides to bring his new girlfriend Pam (Toni Collette) down to his summer house on the shore of some idyllic and fictional Massachusetts beach town. (“The Way, Way Back” was filmed in Wareham, Onset and Marshfield.) In tow are Trent’s diva daughter (Zoe Levin) and Pam’s introverted son, Duncan (Liam James). “The Brady Bunch” this is not.

From the onset, Pam feels out of place among all of Trent’s boozing beach buddies and Duncan wanders about an eternal outcast, though he harbors an adoring eye for the slightly sassy girl next door (AnnaSophia Robb) whom he feels is out of his league because she pals around with his prospective stepsister. As the pat vacation has it, Pam cooks, Trent invites his gang over and they all drink until they pass out. On top of all that Trent has a wandering eye and a penchant for belittling Duncan. In short, the adults are the ones behaving badly while away.

Duncan covertly takes up a job at the Water Wizz amusement park, where the other half (townies and the cheap seat vacationers) roll in to find their slice of summer Eden. The wacky park manager (Sam Rockwell) fills in as an unconventional but effective older brother figure and instills Duncan with the necessary self-esteem to approach Susanna (Robb).

Susanna and Duncan are awkward and moving as they try to find a connection and navigate their youthful angst, which is exacerbated by their parents’ dysfunctions and need for alcohol. Pam, as a lonely single mother looking for her chapter two, also affects. Collette, always on her mark,  gives a subtle but nuanced performance in the fairly thankless role, and her two younger stars, Robb and James, also shine. Their work here should bear greater fruit down the line, especially Robb, who’s a gifted young actress imbued with a splash of Lolita.

If there’s any shortcoming to the film, it’s that the two first-time directors try to do too much. You can almost imagine their excitement during bull sessions while penning the script, but when it came time to shoot they just didn’t have the impartial eye of an third party to help shape, hone and cut. Ultimately the film settles on Duncan and his quest to find himself and some solace during the summer from Hell, yet it is also about Pam and her desires and the arrogant Trent and his freewheeling beach crowd and their antitheses over at the Water Wizz, which has its own set of zany characters (Maya Rudolph, Faxon and Rash in bit parts) and that’s not even mentioning Trent’s perennial partners in crime Kip (Rob Corddry) and Joan (Amanda Peet) who have truckloads of baggage and closets full of skeletons – and Betty next door (Alison Janney, who pretty much walks off with every scene she’s in), Susana’s mom and a widow, who wakes up making margaritas before breakfast and ridicules her son’s lazy eye openly in public. It’s just too busy, and the rompish silliness over at the Water Wizz sometimes feels like a stilted vignette from the woeful “Grown Ups,” which also was shot in Massachusetts and has a sequel coming out this summer.

“The Way, Way Back,” which refers to the rear-facing seat of Trent’s classic station wagon, has big ambition, lots of heart and a tricky knee.