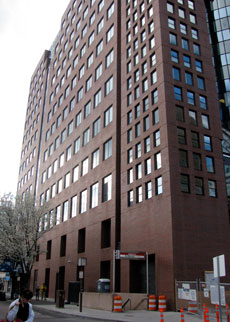 The Cambridge Redevelopment Authority could find itself with a roommate: the Kendall Square Association.

With Microsoft expanding into space the association occupies at the Techstars startup incubator on the sixth floor of 1 Cambridge Center, the association’s three staff members will be needing a new address in September, while the similarly small-staffed authority could save money on its offices two floors down by bringing in a tenant. The authority has a full-time staff of one.

“It would be great to be of short-term assistance to the Kendall Square Association and to get some money to decrease our rent,” board member Margaret Drury said.

Chairwoman Kathy Born said, “I don’t see it as offering support. I see it as a business deal.”

It seemed like a win-win idea for organizations with a shared mission to develop and promote Kendall Square, and it seemed simple as members of the authority’s board started talking about the deal Wednesday at their monthly meeting – especially as renting out a room to the association for four months at $1,000 per month could come in below the $5,000 procurement level that demanded the authority open up the process to bids, authority Development Officer Tom Evans said.

But members wondered if there would be confidentiality concerns as the organizations shared space and office equipment, and they worried that it would look like favoritism if space at the CRA went to the association without letting others seeking space in Kendall Square bid at the same time.

“We want to make sure it doesn’t have any appearance of impropriety,” board member Barry Zevin said.

“No room at the inn”

Drury doubted many people would care if a single room at $43 per square foot went without bid to the KSA, but she was told that a space crunch throughout Kendall Square could make even this tiny space seem desirable to any number of startups.

“The CIC is no room at the inn,” said Brian Murphy, assistant city manager for community development, referring to the Cambridge Innovation Center business incubator across the street at 1 Broadway.

The crunch is sending “Kendall Square businesses” to East Cambridge and Alewife; prompting bids for startup space in the languishing Foundry Works Building, an empty 52,000-square-foot structure of former manufacturing space at 101 Rogers St. that the city owns; and inspiring the City Council to demand that the Massachusetts Institute of Technology provide “Innovation space” for startups when it remakes its campus in Kendall that equals 10 percent of all office space it builds. (Not all of it has to be within the institute’s newly zoned 26 acres; some would be within 1.25 miles of it.) The amount started at 5 percent; councillor Minka vanBeuzekom hoped to get as much as 33 percent.

The authority could subdivide its own office space or give back some of it to Boston Properties so it could handle leasing. Born said there were already three-way talks among the landlord and organizations.

But legal counsel Jeffrey Mullan said “Giving the space back temporarily is difficult.”

The authority’s lease goes until May, and Evans said it will soon be time to talk with Boston Properties about renewal. It is already doing strategic planning and refocusing its mission and practices as it possibly wraps up its current urban renewal plan, and Evans said that process could result in different space needs for the authority as soon as January.