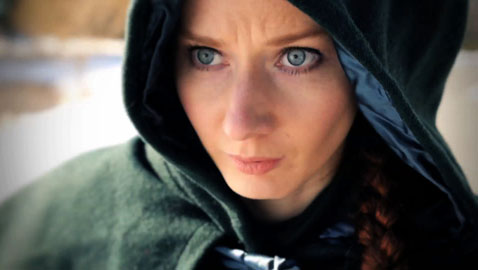 “We shot it in March of this past spring … with the snows of February still on the ground,” said Jaggery’s guiding voice, who goes by Singer Mali, “Amanda Palmer and Neil Gaiman have been renting the beautiful house, and let us take it over for a few days while they were out of town.”

The house, which Curbed called “the priciest rental available in Cambridge” since the economist’s death in 2006, fits well the lush but foreboding tone of the song, which contrasts cozy tea making with some grim investigations, fretful walks through freezing woods with a nightmarish mugshot from historic crimes.

The full band was at the Out of the Box Festival in Boston this past Friday; Singer Mali has an Aug. 2 art opening at Boston’s Bromfield Gallery, 450 Harrison Ave.