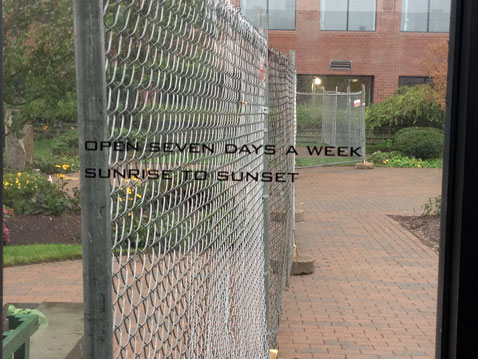 Hours of access are shown in October on the door to a rooftop garden reduced by 42 percent by construction for Google and a yet-to-be-built apartment tower. (Photo: Marc Levy)

For many, a Cambridge Chamber of Commerce business-after-hours event Tuesday evening will be a first chance to see Kendall Square’s shrunken rooftop garden and the structure that shrank it – a two-story “connector” between two sets of Google offices – and see if it’s as underwhelming as described by Cambridge Redevelopment Authority members.

The structure, given a 4-1 vote of confidence by authority board members nearly a year ago, was described as needing wide-open spaces and presented as being transparent, but by last month it was obvious neither design approach had been followed.

While Chris Bator, a member who voted for the project, said in June he would “remember and be disappointed or unhappy” if the promises of Google and its landlord, Boston Properties, weren’t kept, at the July 17 meeting the realities of the project were met with resignation.

“I’m not sure there’s anything relevant to say. It is what it is. It certainly is not – I don’t want to go there, but it’s certainly not as advertised,” said Barry Zevin, the sole board member voting against allowing Google’s plan to start construction in the fall. “It’s pretty standard office space … not terribly open [and] it’s not as transparent as presented.”

Discussion among board members and their staff revealed one design approach Google was denied: The company had wanted to plaster its logo across both stories of the structure, resulting in the square’s largest company sign by far, Zevin said, citing a report by Stuart Dash, director of community planning with the city’s Community Development Department. The company had been warned that the giant logo wouldn’t be welcome.

In addition, Boston Properties representatives Kevin Sheehan and David Stewart said they were still “arm-wrestling” over how to divide the 5,000 to 6,000 square feet of garden space on the western side of Google’s connector structure. The space is meant to be used by Google workers and residents of an apartment tower Boston Properties has promised to build, but the two kinds of users need to be separated because of security concerns. How to do that, and the resulting debate over who gets how much square footage of greenspace, hasn’t been resolved.

“We’re hoping to landscape it in such a way that we wouldn’t have to put up a fence,” Stewart said.

There is still 25,340 square feet of rooftop garden on the east side that will host the chamber’s Tuesday event. The invitation to the “Summer BAHsh (Business After Hours)” from 5:30 to 7:30 p.m. is described as offering a “spectacular evening atop one of the ‘best-kept secrets’ in Cambridge.”

“The rooftop garden is open and we have the opportunity to enjoy this beautiful and hidden rooftop gem. Take in the lovely views and great company at the annual Summer BAHsh. The Cambridge Chamber of Commerce Women in Business Committee invites the entire Cambridge-area business community to enjoy delicious food, refreshing beverages (cash bar) and the best networkers in the business,” the chamber release said.

The cost is $30 for chamber members or $50 for nonmembers.

The garden is also open daily for free from 6 a.m. to 8 p.m., with its closing to the public for private functions being a source of tension in the past.

The garden is at the Cambridge Marriott Hotel, known as 2 Cambridge Center or 50 Broadway, and reachable by taking the parking garage elevator to the top floor.