‘Elysium’ and ‘Europa Report’: Damon to the rescue in first of 2 half-good space tales 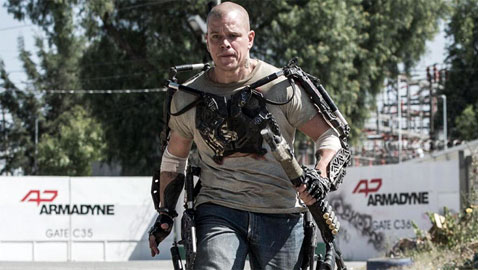 ‘Elysium’ and ‘Europa Report’: Damon to the rescue in first of 2 half-good space tales

For fans of blockbusters out there still hungry for a real summer hit to carry you into the fall, I’m sorry to inform you that “Elysium,” Neill Blomkamp’s follow-up to “District 9,” isn’t the answer – or it’s about as worthy an answer as “Pacific Rim” was. What the South African wunderkind, who wowed audiences with his stark and inventive first film (which garnered several Oscar nods, including a Best Picture bid) has conjured is not so much a new, grim re-envisioning of the not-so-distant future (it’s 2154), but a retooling of the film that made him an A-list name and, unfortunately, something addled by everything bloated and boxed-up that Hollywood brings to such a project when it gets its hooks deep into an upcoming auteur. 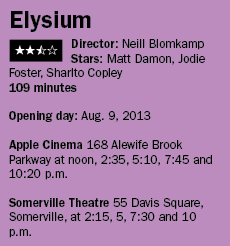 The plot moves like whiplash. L.A. is now a wasteland reminiscent of the South African ghettos that the wayward aliens in “District 9” inhabited and the rich reside on the lush, luxury ring-world (thank you Larry Niven!) of the title that’s just a 20-minute shuttle ride up into the sky. Up there, universal health care is a reality, they have medi-pods that can heal anything from cancer to the clap. They can even rebuild your face should it get shot off – if your brain still works. To get a medi-pod to heal, you must be a barcoded citizen of Elysium; if you live on Earth, you’re living in the new third world and there’s no grand social program to cover your ass.

Forget any type of political deeper meaning; like “Logan’s Run,” or even “Oblivion,” the perfect outer and the ugly underneath is just plot garnish, a notch above McGuffin status. Max (Cambridge’s own Matt Damon), the intrepid hero du jour, is an ex-con with a heart of gold (yes that cliché) who accidentally gets irradiated on the job and without much remorse from his employer is given a vial full of pills and five days to live.  Most people would roll over or go out with a bang, but not Max. To get up to one of those cure-all tanning beds, all he’s got to do is get a Robocop exoskeleton welded to his frail body, shoot down a shuttle with an RPG, download the contents of a billionaire’s brain and save the poor. Not so easy, but also not so tough, as the few people we do see on Elysium are candy-assed effetes. The exception is Jodie Foster’s icy minister of defense, who’s pretty much the unfortunate union of Donald Rumsfeld and Tilda Swinton, but the real trouble comes in the form of Kruger (Sharlto Copley, the star of “District 9”) a covert assassin who, while at the beck and call of the Elysian powers, would just as happily slit their throats too.  He’s the wild card in an otherwise predictable house of cards.

The film looks great, and I hope the next time Hollywood trots Blomkamp out, they take the gloves off and let him get to it.

It’s tired and clichéd, but “in space no one can hear you scream,” is a cinematic truism. Even if someone could hear you, what could they do? 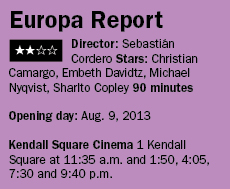 “Alien” defined the maxim, and many over the years – like the macabre but mediocre “Event Horizon” (1997) – have tried to follow Ridley Scott’s trail with little success. “Europa Report” goes into that charted territory, employing a battery of “Blair Witch Project” cams, except they’re not handheld by an imperiled victim-in-waiting, but video surveillance equipment affixed on a spacecraft on a deep-space mission to explore a distant moon orbiting Jupiter.

The crew’s a generic, international smorgasbord, barely discernible if it weren’t for their various nationalities and race (among them Sharlto Copley, who gets his second space mission this week). Director Sebastián Cordero nicely uses quartered screen imagery to jazz up the action, and on Earth there’s Embeth Davidtz barking out orders and giving background from the confines of mission control. The journey out feels like Kubrick’s “2001: A Space Odyssey” but when they get to Europa it turns “Blair Witch” – yeah, there’s something out there on that frozen hunk of ice.

“Europa” begins promisingly, but sails off on an arty, jacked-up version of the “Lost Tapes” faux-documentary TV series that explores modern myth – bloodsuckers, sea monsters and poltergeists, oh my!