‘The Butler’: He serves eight presidents, and as a tale of black experience in U.S. 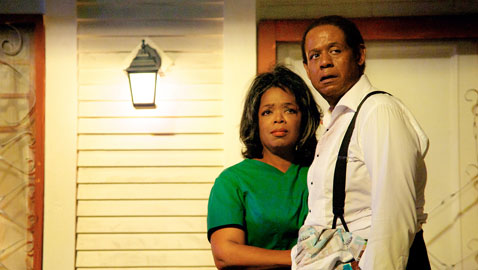 ‘The Butler’: He serves eight presidents, and as a tale of black experience in U.S.

In the wake of the George Zimmerman trial, you couldn’t ask for a better movie – or I should say movies – to help carve out a common understanding in the middle of the racial divide. No matter how you took the Zimmerman decision, Ryan Coogler’s “Fruitvale Station” delivered an air-tight version of the same story with the same tragic end, the main difference being that the shooting took place before an audience of cellphone cameras, leaving no wiggle room for conjecture as to what happened between two men in the dark. But also, and more to the point, the “based on real events” docudrama tapped eloquently into the plight of the young black man struggling to succeed in a society reticent to give him a fair shake based on the color of his skin. 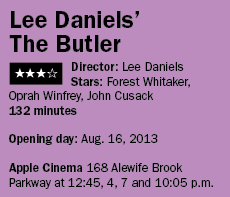 To underscore that, and for anyone who’s of the mindset that we’re beyond the Civil Rights era and affirmative action and that opportunity is out there for all to take on equal terms, sit through “Lee Daniels’ The Butler” and see if you still feel that way. Perhaps the best way to describe “The Butler” is as a short, painful history of the black man in America. The film centers on one, who grew up basically a slave in the early 1900s and went on to serve eight presidents as a staff server in the White House.

True, slavery was abolished under Lincoln in the mid-1800s, but on the cotton plantation Cecil Gaines was raised on in Georgia, the emancipated laborers and their progeny were still treated as little more than disposable property. As a boy, Cecil witnesses his mother pulled from the field and hauled into a shed for a brief, brutal interlude with a scowling plantation owner, and when Cecil’s father says something about it in the aftermath, he’s given a bullet to the head for protesting the rape of his wife.

There are several such atrocities that percolate throughout “The Butler,” even after Cecil (Forest Whitaker) relocates his family up north and begins his tenure under Eisenhower (Robin Williams). And as much of an opportunity as working in the White House would seem, Cecil has a stormy house of his own to contend with. His wife, Gloria (Oprah Winfrey, acting for the first time in more than a decade) is an alcoholic and carries on an inappropriate relationship with the smooth soothsayer next door (Terrence Howard); his eldest son, Lucas (David Oyelowo) disagrees with his dad’s “don’t rock the boat” stance and becomes an outspoken political activist. He’s arrested repeatedly for riding on the “Freedom Bus” and gets into a tangle with the Klan, later syncing up with the Black Panthers.

“The Butler” sails effortlessly through time, chronicling the evolution of the country and Cecil’s family. Under each new administration there are junctures in which Cecil gets his one magic moment with the president, including Kennedy (James Marsden, getting a passing grade on the accent) who asks him about his son and his activities. The conversation, as the film has it, goes on to have some small effect in Kennedy’s push for Civil Rights. Now, if you’re rolling your eyes a little at this, you’d be only somewhat right; Cecil Gaines is a fictitious representation of Eugene Allen, who really did serve eight presidents. And for all its contrivances, “The Butler” is an interesting and compelling conveyance of American history through the eyes of one man for whom every social movement has a profound impact, and it’s purposefully staged (perhaps too much so) with Cecil on the inside and Lucas on the countercultural fringe.

The direction by Daniels and Danny Strong’s script (based on a Washington Post article by former Boston Globe scribe Wil Haygood) are oft heavy-handed and maudlin, but what they’re attempting – to compact so much into so little – is buoyed and bound by Winfrey and Whitaker. The two are superb together as people drawn together and pulled apart (over the years) by politics, work, addiction and ideals. Home is where the heart is, and Daniels and Strong get it. The wide-ranging cast includes Cuba Gooding Jr., Lenny Kravitz, Mariah Carey, John Cusack as Nixon and Jane Fonda killing it as Nancy Reagan.