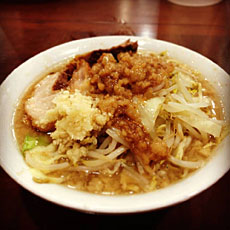 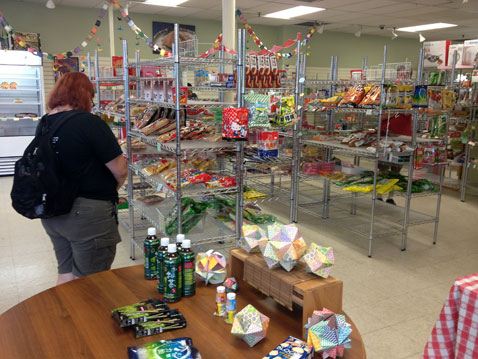 The shelves at Miso Market in Porter Square have been emptying rapidly as its closing nears. (Photo: Marc Levy)

It’s the day the ramen phenom Yume Wo Katare reopens after a summer break that saw renovation of the tiny walk-up storefront.

It’s also the day Miso Market closes after being open a little over two years – since Aug. 5, 2011 – and after its own August vacation.

The small Asian market, celebrated as the long-awaited replacement for the lamented Kotobukiya market squeezed out of the Porter Exchange (now known as The Shops at Porter) in May 2009, was open barely a year before its long-term existence at 1963 Massachusetts Ave. was threatened by the sale of its host building.

New owner Urban Spaces is expected to raze the 82-year-old, 17,384-square-foot brick building and rebuild it as a five-story condominium building with basement parking – but that wouldn’t have been until the end of Miso Market’s five-year lease, and in the meantime other slots in the four-storefront building have filled in with a Sleeparama and AT&T store.

The remaining three years are not enough for the owners of Miso Market, Stephen and Fumi Genova, who had been gathering customer signatures on a petition to present to the landlords. They said they signed a lease and spent months installing a kitchen because they were convinced they could have a decade in the location.

“We have been more or less forced to end our lease here,” they said in a message to shoppers. “We are proud of the business we built here and are appreciative and thankful of the customers who supported us.”

The store went to reduced hours from July 28 to Aug. 3, starting by selling its wares at 25 percent off, then 30 percent and finally to 50 percent. The shelves inside are already nearly stripped as the store is readied for re-opening at noon Thursday before closing for good Aug. 30. There have been no responses for comment or questions from shoppers online about whether the store will reopen in another location. The website has been shut down.

That might leave shoppers needing authentic Asian wares forced to make the trek back to Ebisuya Japanese Market at 65 Riverside Ave., Medford — nowhere near the city’s orange line T stop but reachable by riding the 96 bus from Porter.

The ramen dish at Yume Wo Katare has had customers waiting up to two hours for a taste.

At least they’ll have the celebrated ramen of Yume Wo Katare to soothe the pain. The eatery opened last fall, replacing Zing! Pizza at 1923 Massachusetts Ave., and was immediately swamped by diners eager to wait in line to sit family style and slurp down its sole menu item: hand-made ramen noodles in 24-hour pork bone broth, served at two sizes, with no takeout (even of leftovers) allowed. Lines got 50 deep and people waited two hours to get in. Critics were rapturous.

“We’re sorry to have made you wait all summer, but the day has finally arrived! Please be ready to join us Friday, August 30th for our grand reopening,” owners said via Facebook. “Settle your summer-long craving for pork ramen and check out our newly remodeled shop!”

Re-0pening night hours, and hours thereafter, are from 5 to 11 p.m.

Update on Aug. 27, 2013: There is takeout of a sort from Yume Wo Katare! A sign posted ahead of Friday’s re-opening says customers can take away some cha-su pork in fatty or less-fatty versions for $15. “There’s no need to wait in line,” the sign says. “Just come inside!”