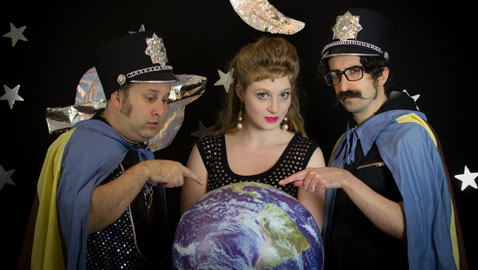 After peppering the local music scene with an ever-evolving kaleidoscope of bands and projects, becoming a master of social media and moving into full-length films with the Kickstarted horror film “Ten,” the Somerville duo of Michael J. Epstein and Sophia Cacciola are headed into television territory with “Space Balloons.”

With roots in “kindie rock,” a 2011 pilot for MyTV by Allston’s Rob Potylo called “Worried All The Time” (described as “a children’s show for adults”) and maybe a bit of The Monkees, “Space Balloons” is in production for early next year, Epstein said, with a pilot reported in late August as being near completion.

But a segment of the show called “Hovercraft Full of Eels” got a sneak release on YouTube last week – a video for a song from the Space Balloons album released in May 2012.

Epstein and Cacciola appeared in character in “Worried All the Time” with various other local musicians whose performances edge into theater and burlesque – including Meff ’n Jojo’s Tiny Instrument Revue and Walter Sickert & the Army of Broken Toys, renamed the Galactic Army Of Toys to match Potylo’s backstory: a riff on “The Little Prince” that had Potylo fleeing his job (making balloons!) for a cold, lonely planet where he finds a lady flower who helps him play host to weekly visits from an “amazing cast of characters.” (That included the Space Balloons, in a song and video that should be embraced by hipsters everywhere as well as fans of Epstein’s own distinctive facial hair: “The Mustache Song.”)

The duo has its own back story for the equally whimsical “Space Balloons”:

While napping after a particularly hearty meal of grapes, Balloononians Admiral Sophia (Sophia Cacciola), Science Officer Michael (Michael J. Epstein) and Navigator Joe (Joe Kowan) drifted a bit too far off course in their balloon spaceship. Now they wander the galaxy in search of their home planet Balloononia while spreading the customs and culinary interests of their society in song.

There’s a lot of grapes in “Space Balloons” – at least three songs on the album refer to them directly, including “Hovercraft Full of Eels” – but just as “Worried All the Time” was targeted at a misfit demographic of “kids and adults who don’t fit in quite perfectly,” Space Balloons aim their music across generations with far more complex plot threads.

As music site To Eleven notes, Space Balloons makes children’s music, but “That’s not to say you won’t like it, or that you shouldn’t say ‘I’m confident enough in my musical choices to listen to a children’s album and not be embarrassed.’”

“The album features the only children’s song I can think of that references both Kurt Vonnegut Jr. and the Violent Femmes,” wrote To Eleven’s Jason, and there’s even another Vonnegut-inspired song in “EPICAC”: