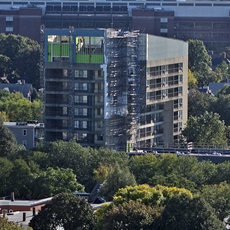 The Cambridgeport Neighborhood Association meets Sept. 19 at the Lyndon B. Johnson Apartments.

Political season has begun in earnest with the announcement of a Cambridgeport Neighborhood Association reception for City Council candidates Sept. 19.

The 26 candidates – 19 challengers and seven incumbents vying for nine seats in a Nov. 5 election – are invited to an hourlong reception with light refreshments, board member Olivia Fiske said Thursday.

The 6 p.m. event is planned for the Community Room at the Lyndon B. Johnson Apartments, 150 Erie St.

The association’s regular meeting follows, with Green Cambridge’s Quinton Zondervan and A Better Cambridge’s Jesse Kanson-Benanav invited to talk from opposing sides about “Considering Net-Zero Development”; Zondervan helped write the citizens net zero petition before the council and Planning Board, while A Better Cambridge has come out against it.

The citizen proposal wants higher environmental standards on big construction projects, with several ways to achieve lower greenhouse gas emissions, and for developers and landlords at affected projects to report yearly on their energy use. A Better Cambridge says a net zero law will scare developers away. It had not responded to the association’s invitation by Thursday, Fiske said.

The net zero petition is expected to be back before the Planning Board on Oct. 1 – the first appearance, Aug. 20, brought a flood of public comment that didn’t allow board members time to talk – followed by a “Getting to Net Zero” panel discussion hosted by Mayor Henrietta Davis the next day at 8:30 p.m. at the Cambridge Main Library.

“I really have no doubt that we’re going to get [to net zero],” Davis told proponents of the petition at an Aug. 14 meeting, suggesting they were moving too fast. “It’s great you brought this up … but I’m not sure it isn’t better to take [a] measured approach.”

Also on the association’s agenda this month: designs for a 96-unit apartment building at 240 Sidney St.; a new tenant for the Vertex campus at Waverly and Erie streets; riverfront signs; developments on the revitalization of Magazine Beach; and plans for the Oct. 5 Cambridgeport History Day in Dana Park.