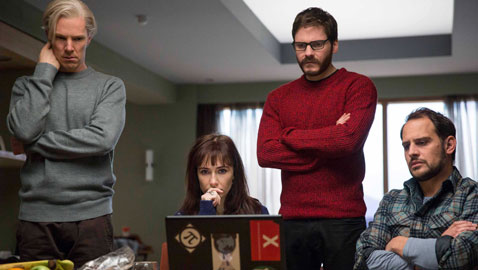 WikiLeaks, a renegade news outlet, takes hacked secrets from government agencies and publishes them to the world sans redaction, protecting the identity of the whistleblower through an elaborate “submission platform” that’s so secure even the publisher doesn’t know the identity of the leaker. The site’s notoriety reached its apex when it published reports exposing U.S. intelligence assets abroad and snippy interoffice memos from State Department officials trashing world leaders. But that’s just the background and part of the denouement of “The Fifth Estate,” which is really more a character study of WikiLeaks founder Julian Assange and his rise to international infamy. 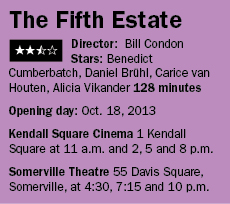 Assange is played by Benedict Cumberbatch (Khan in the last “Star Trek” chapter) who in long white locks and with piercing blue eyes looks somewhat ethereal or otherworldly, like the fair-haired elves in the “Lord of the Rings” trilogy or the calmly maniacal Julian Sands in the “Warlock” films. Cumberbatch’s Assange is a hard beast to wrap your hands around. He’s gruff, arrogant, but at the same time an idealist who spends time in Africa trying to expose corrupt governments stealing money from the people and killing anyone who questions their brutish entitlements. The film’s window of insight into Assange’s mystifying persona is his early collaborator Daniel Berg (Daniel Brühl, who played Niki Lauda in “Rush”), who at first idolizes Assange and his mission but later has ideological differences over what to do with the military papers the then-Bradley Manning leaked to them (it was Manning who exposed himself in a chatroom).

The film is directed by Bill Condon, who had notable successes with “Dreamgirls” and “Gods and Monsters,” but recently has been involved in the hackneyed “Twilight” series. He keeps things clicking along with Twitter-brisk editing and plenty of acerbic Assange diatribes, and he makes sitting at a desk and hacking away against the clock a time-bomb-beating experience. As far as composition goes, the film looks great, but there’s not much insight into Assange. His stories of his white hair and his long unseen son (near adulthood) eventually just feel like ploys used by Assange to manipulate others – and that’s the fatal fault with “Fifth Estate”: Assange is an asshole and you can’t wait for him to get his comeuppance.

The well-heeled documentary filmmaker Alex Gibney came out this year with “We Steal Secrets: The Story of WikiLeaks” which got at Assange and the WikiLeaks story more satisfactorily. What Condon was aiming for is unclear. It postures well and Cumberbatch is riveting as the media-shaping reptile, but in all the plumbing of the journalistic ethic and mad-dash globe hopping, there’s just no soul to sell.