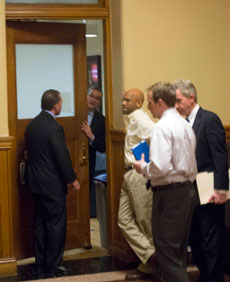 With the discovery of a photograph tweeted and forgotten half a year ago, resident activist Charles Teague hopes to restart an open meeting law complaint period that expired five months ago.

The issue at stake in April: The remaking of 26 acres of institute land in Kendall Square and the school’s interest in not being restricted to build “net zero” on greenhouse gas emissions by buying renewable energy credits, an amendment to its zoning proposed by councillor Minka vanBeuzekom that the council passed briefly with five “yes” votes. The mayor switched her vote on the amendment, causing it to fail, explaining that she’d been told it was necessary by Steve Marsh, managing director of real estate with the MIT Investment Management Co.

While Davis’ vote change itself was done improperly – the mayor never got the required permission for it from her fellow councillors – Teague’s complaint to the Attorney General’s Office concedes that the seven-day window on it has closed.

But the 30-day window on an open meeting law complaint against Maher may have reopened a week ago when Teague secured a photo of Maher meeting with Marsh and other MIT officials. The picture is in the Twitter feed of independent reporter John Hawkinson, who posted it the night of the zoning vote. “Maher meeting w/ MIT reps after amendments pass,” Hawkinson labeled it, and to Teague it shows how Davis heard from Marsh despite never leaving her podium.

“We knew Maher left the room, but we couldn’t prove he talked to MIT. Now we have proof,” Teague said Wednesday.

Teague said he asked Hawkinson in mid-October whether he had photos from the April vote, and Hawkinson then found an image showing a Maher-MIT meeting. Hawkinson hesitated releasing it, then realized he’d already done so – in nearly real time the night of the vote.

As Teague wrote in an Oct. 1 opinion article,

With [councillor Ken] Reeves’ obvious filibuster, it is hard to see how this was not an intentional violation of the state’s open meeting law. Did non-council members discuss the motion privately with Maher or [mayoral aide Matt] Nelson (or both) while the council was in session? Was the public and the rest of the council illegally deprived of their right to a full and open discussion? Davis’ admissions show that MIT was granted special access to some council members while other members and the public were shut out.

Maher was contacted for comment Thursday but has not replied.