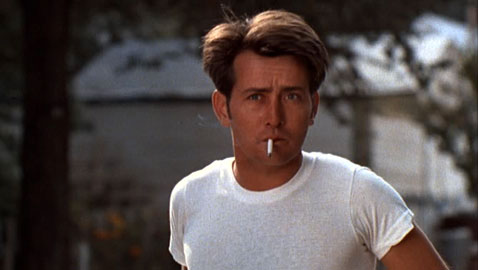 “Badlands”: Terrence Malick’s 1973 debut was a searing and haunting rendering of the Starkweather-Fugate killing spree in the Dakotas in the later 1950s. It’s a more straight-up narrative than the laconic dreamscapes that have become emblematic of Malick’s more recent output. Martin Sheen mesmerizes as Kit, the 25-year-old boyfriend of Sissy Spacek’s 15-year-old Holly, who without much prospects in life gets pushed and, when he reacts murderously, goes on the lam with Holly, leaving others dead in their wake. Sheen is one part simmering James Dean from “East of Eden” and one part detached killer, which seem to be the seeds for his military-sanctioned assassin in “Apocalypse Now.” The film is newly digitally restored and plays throughout the weekend at The Brattle Theatre, 40 Brattle St., Harvard Square.

“The Tree of Life”: Malick made one more film after “Badlands,” “Days of Heaven” in 1978, and disappeared. Many thought him the J. D. Salinger of film, but in 1998 he returned with the hypnotic World War II epic “The Thin Red Line” and has been producing regularly since. His most recent, “To the Wonder,” made many wonder if the reclusive auteur had not finally lost his way, but his previous film, “The Tree of Life,” was a trippy, personal odyssey for each viewer, who could take from the 2011 film their own interpretation of nature versus nurture and the patterns of life and cosmetic karma across generations. The film is shot in lush grandeur by Emmanuel Lubezki, and the excellent, time-traversing cast includes Brad Pitt, Sean Penn and Jessica Chastain.