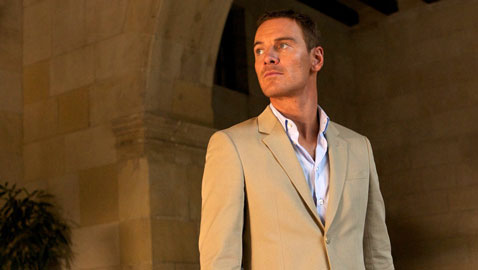 Not so long ago the Coen brothers deviated from their usual quirky fare for a hardboiled yarn about lawmen and criminals playing it loose and lethal as they pursued an elusive satchel of money back and forth across the Southwest border. The basis for that masterpiece came from the laconic and acerbic prose of the Cormac McCarthy’s novel “No Country for Old Men.” And in an odd and intriguing first-time move, the scribe has delivered an original screenplay for iconic director Ridley Scott (”Alien” and “Blade Runner”). The result is full of pointed soliloquies, diatribes imbued with philosophy and poetry and even daubs of philosophy regarding poetry, but the mainstay, of course, are protracted dissertations on death and destiny, followed invariably by death. 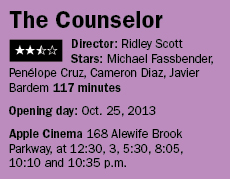 Just as in “No Country,” the plot is driven by an accidental anti-hero ensnared in a macabre web of underworld misdoings. In short, McCathy has cooked up an assured rearrangement of “No Country.” It’s not on par by any means, but it is entertaining. And if you haven’t gotten enough of him lately, Michael Fassbender tackles the eponymous role (“the counselor” is all he’s ever called), as a square-jawed, fashionably stoic defender, who, while very dapper and upper crust, has a long list of unsavory clients. One, an imprisoned mama kingpin (Rosie Perez, putting a lot of pizazz into a brief role), asks him to pay a fine for her son who’s in jail for a traffic violation (going over 200 mph). He complies reluctantly, but doesn’t know that the kid is involved in a scheme to highjack a $20 million drug shipment – which doesn’t matter, because by sheer association he’s now considered one of the brains behind the ever-expanding plot.

Zanies and assassins start to emerge from every corner of the muted desert town. And if the similarities to “No Country” haven’t hit you over the head at this point, Javier Bardem drops in for good measure as the shady club operator who has a few business dealings with the counselor. So does Bardem’s real-life wife, Penelope Cruz, as the counselor’s betrothed, but she’s mostly just garnish and a bargaining chip. The real feminine firepower comes from Cameron Diaz as the high priestess of the Southwest gangland. She’s flip, enjoys Gucci and Prada and doesn’t value life too much, and, if she so desires it, she’ll fuck a Ferrari (no joke).

Brad Pitt’s in the mix too, as another shady sort who advises the counselor on how to get his neck out of the noose. But his role, like Cruz’s, feels more ornamental than substantive. Perhaps somewhere out there is a studio exec who thought it would be devilish fun to release Pitt and Fassbender in this western noir the same week the pair appeared in the more serious “12 Years a Slave” – celluloid buddies to save the day at the box office?

The problem with “The Counselor” isn’t so much the ever-twisting and inward-folding machinations that keep the engine humming. That works quite well. The problem is that none of these people are likable, and Fassbender’s counselor is such a stiff that you never really give a rat’s ass if he gets offed or not. But the film looks great. Scott has always been a visual stylist, and really summons up the dusty milieu with artistic élan. McCarthy too packs it with some treasures and a potpourri of indelible underlings. Heads roll (literally) and the stash of drugs is carted around in a septic truck that from time to time gets shot up and repatched so that the shit don’t stink. That’s the wicked type of fun “Counselor” has. It’s not much, but it clicks along just enough.