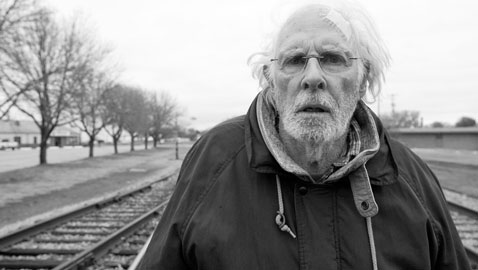 In his films, Alexander Payne has shown a strong predilection for men somewhere north of their prime, still lost and looking for grounding. The roots took hold with “About Schmidt” (2002), got wacky and whiny with “Sideways” (2004) and moved to Hawaii with a more dour tone in “The Descendants” (2011). Payne’s latest, “Nebraska” maybe be the ultimate in mature male malfunction, and in a sweet elegiacal way it ties back to “Schmidt”: Its protagonist, Woody Grant, played by Bruce Dern, has a dry, flyaway comb-over reminiscent of Jack Nicholson’s hair-challenged Schmidt, and in both films the men’s wives were played by June Squibb, who practically upends and nearly steals the film as it sails into the third act. 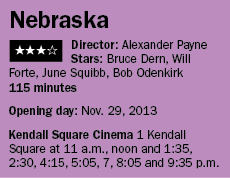 The setup’s pretty rudimentary, with the aging Woody insistent on getting from Montana to the state of the film’s title because he’s received a note in the mail informing him he’s won $1 million. We’ve all gotten that Publishers Clearing House nonsense before, and we all know it’s bunk, but Woody, frail and vacant, seems to be around the bend faculty-wise, whether it’s depression, too much sauce over the years or (and the film never floats it as a possibility, though it would have gone the furthest in selling the rhyme behind Woody’s insipid quest) suffering from dementia. As a result, Woody can’t drive, so 40-year-old son David (Will Forte), stuck in a dead-end job at a Best Buy knockoff and dumped by his Reubenesque girlfriend, agrees to take on road trip duties. He views as an opportunity to take stock and an odd chance to give his dad some sense of closure. It adds to the calm turmoil that Woody was never a present father or husband and drank too much (and still does).

The two drift along fairly innocuously until a bar brawl derails them and, against Woody’s wishes, they make an excursion to Woody’s old hometown, where the streets have a depressed1950s sheen and the kin are little more than couch potato rubes. Adding to the none-too-friendly homecoming, Stacy Keach slithers in as Woody’s sleazy old auto shop partner and the million-dollar prize becomes big news and a big joke in the sleepy cornfield town. As push comes to shove and revelations hang on the horizon, the rest of Woody’s Montana clan roll in. For all the hoopla, you’d think Woody held a contested winning lottery ticket.

Dern’s gaunt frame holds the film up firmly, even though the role is fairly two-note. More is asked of Forte in the thankless bit as the rational son caught up in the nonsensical senior moment, while SNLer Bob Odenkirk fills the juicier part of  the cantankerous older brother who wants to be a news anchor.

Payne boldly shot the film in muted black and white. The result is a gentle, grainy dimming that mirrors Woody’s wayward cognizance. It’s a quiet accomplishment that Dern and Payne have notched: The pair have made an American asshole sympathetic and full-bodied. Part of that’s done by surrounding Woody with even deeper-steeped miscreants. It may be a cheap trick but, sadly, there’s no sleight of hand in the truth.