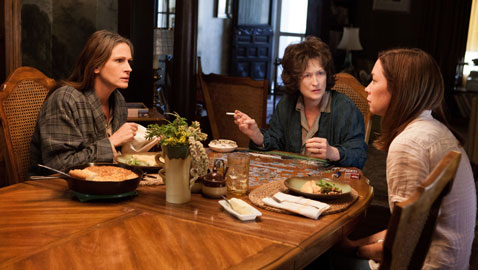 There’s plenty of thespian timber and uncorked rage in this austere melodrama about familial dysfunction and reckoning out on the plains of Oklahoma. The emotional turbulence in “August: Osage County” is devastating, so much so you could think of it as an angry twister wreaking havoc across the sleepy farmland or the evil stepsister to “Steel Magnolias,” appropriately shamed and exiled to the prairie for bad behavior. 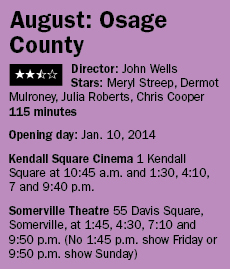 If there’s any calm in the film, it’s the the one that comes before the storm, and even that’s not so pretty. It all begins serenely enough as Beverly (Sam Shepard) confesses to Johnna (Misty Upham, as the newly hired house help who has to, by job description, endure the oncoming onslaught passively) that he drinks too much, but that it’s tolerated by his wife because he puts up with her incessant pill popping. Beverly’s a dapper guy with a slight twang and a love for books. No sooner has he presented Johnna with a personal selection (T.S. Eliot) for her to read than his wife, Violet (Meryl Streep), lopes through the door red-eyed, in a bathrobe and hopped up on something. Her hair’s short, matted and falling out. She looks like an extra from a film exposing Nazi atrocities.

We learn quickly enough that Violet has mouth cancer, which is both a touch poetic and ironic in that what comes out of her mouth is nothing but cancerous. She judgmentally asks Johnna if she’s an “Injun” and what kind, then proceeds to tear into Beverly for being a boozing philanderer and do-nothing. Is it the pills or something more deep-seated? For a woman on death’s door and flying high, Violet has all the reserves of a Navy SEAL Team.

Soon, two of the three Weston daughters descend on the house, Iris (Julianne Nicholson) and Barbara (Julian Roberts) with her estranged husband (Ewan McGregor) and their precocious daughter, Jean (Abigail Breslin, changing it up impressively from her turn in “Little Miss Sunshine”), but Bev is missing and oddly, none seem too concerned. He’s subsequently found drunk and drowned and it’s the funeral that summons in third daughter Karen (Juliet Lewis) and her Ferrari-revving beau (Dermot Mulroney), as well as Violet’s controlling sister, Mattie Fae, (Margo Martindale) and her introspective husband, Charles (Chris Cooper).

If the reveal about Bev’s demise seems a spoiler, just know that it comes in the opening few moments, and plot-wise serves as the linchpin for the potpourri of combative personalities to assemble and take off the gloves – if they were ever even on. I’ve been told that the original Tracy Letts’ Tony Award- and Pulitzer Prize-winning play runs well beyond three hours on stage and is a touch more subtle and nuanced than director John Wells’ screen adaptation. Letts’ works in general are angry and often violent compositions – just check out the 2011 screen rendering of his “Killer Joe” and you’ll know what I mean hook, line and grim sinker.

The cast of “Osage” possesses no less than five best acting Oscars among them (three are Streep’s) and Wells, either by design or timid admiration, lets the actors loose to steer themselves. The result is both impressive and muddled. Each hits their notes with aplomb, but few seem to bounce off each other with any synergy. Wells, who has worked well with a diverse ensemble before (including Cooper) in “Company Men,” tries to condense too much meanness into a lean two hours, and perhaps the more grounded medium of the screen alleviates the inherent suspension of disbelief that comes with the stage.

It’s not until the post-funeral feast that the Westons’ deep, dark closet of skeletons, hinted at for so long, finally gets opened. Incest, childhood abuse, tough times and infidelity get trotted out with vitriolic accusation. Cancer and the recently passed loved one seem to be the furthest thing from anyone’s mind, and the men sit by emasculated and soak it all up silently like cornbread in curdled gravy. Barbara, as tart-tongued as she is, garners some sympathy; she’s trying to be a good mother and repair her marriage after her husband has stepped out with a coed under his tutelage. The most endearing of the Weston clan, however are Nicholson’s Iris, a branded spinster who’s never left the dust bowl, and Mattie Fae’s meek son, Little Charles (Benedict Cumberbatch in an intriguing juxtaposition from his recent turns as Khan and Julian Assange), constantly berated as a halfwit by his own mother. They’re the only ones who possess any hope or optimism despite their limited possibilities – a notion that becomes even more isolated and embossed by the hate and vitriol raging around them.

With a less competent ensemble “Osage” might have been just a disturbing, forgettable go. Even with A-listers, the pecking and picking rages on far too long, with scant moments of reflection or atonement. It’s the somber quiet ones such as Charles Sr., Iris and Charles Jr. who give life to the Weston’s big house of pain on the prairie.