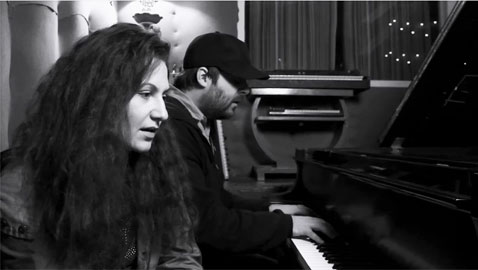 With the release of sophomore album “In Roses” coming Jan. 28, there’s lots of stuff going on with Somerville’s lustrous but melancholy Gem Club. Start with the posting of another song from the album, this one called “Braid.”Listen to the powerful track here.

National Public Radio – which did a Tiny Desk Concert with Gem Club all the way back in December 2011, the year of its debut album, “Breakers” – posted the entirety of the new album here on Sunday.

“In Roses” is also still available for pre-order digitally or on CD or as a 2XLP set (with a download code, in case devotion to vinyl doesn’t preclude listening to music when leaving the house). A very limited amount of postcards, with images inspired by a song on the album and a title card, are available with the earliest orders. The cards, by artists Adam Larson and Heather McGrath, are hand numbered and assembled by the band – singer/pianist Christopher Barnes and collaborators cellist Kristen Drymala and vocalist Ieva Berberian.

The band has an album release show 7:30 p.m. Jan. 31 in the Remis Auditorium at Boston’s Museum of Fine Art, 465 Huntington Ave., Boston, with videographer Brianna Olson and Nat Baldwin of Dirty Projectors.

Tickets are $20, or $16 for MFA members, seniors and students, and another $5 buys guaranteed premium seating in the first three rows of the auditorium. Tickets can also be ordered by phone at (800) 440-6975 or in person at the museum’s ticket desks.