‘Labor Day’: Escaped convict very handy in the kitchen, handsy with his captive 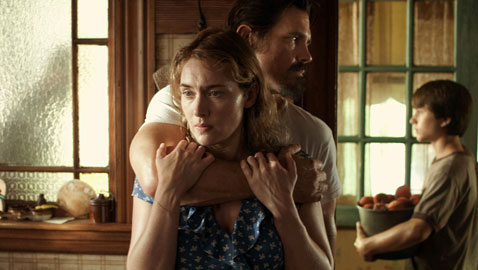 ‘Labor Day’: Escaped convict very handy in the kitchen, handsy with his captive

A good meal can solve a lot of things. Leftovers, mixed with canned goods from the pantry, can sate as well – but not so much here in Jason Reitman’s uneven romantic hash chock full of disparate parts, stock elements and daubs of cliche. 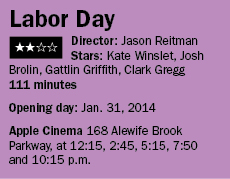 Reitman arrived as a quirky indie director with his acerbic big tobacco satire “Thank You for Smoking” (2005) and held the line steadfast with “Juno” (2007) and “Up in the Air” (2009). Even “Young Adult” (2011) bore his droll, punchy fingerprint, which is why “Labor Day” is such a puzzler, a change-up royale and a by-the-numbers affair that lacks air, style or wit.

Reitman’s previous works were hung carefully on the framework of a situational dark comedy infused with varying degrees of romance. “Labor Day,” of all things, is a dark romance with a deep vein of crime drama to propel it. Perhaps Reitman saw the project as something new to challenge his skills, or maybe he simply couldn’t pass up the opportunity to work with Kate Winslet and Josh Brolin, two of the industry’s most complete and capable thespians.

Those two performers turn out to be the film’s saving grace. Brolin recently clocked a yeoman effort to give legs to Spike Lee’s remake of Chan-wook Park’s “Oldboy” and here too delivers assuredly with simmer, compassion and just the right amount of intimidation as Frank, an escaped con who takes a woman and her son captive from a thrift store in a deep New Hampshire enclave. It’s the mid ’80s, so Frank doesn’t have to contend with a texting adolescent to give him away or a the Internet alerting folks as to his wanted status.

TV news flashes do provide a bit of an obstacle, but they’re also a means to inform viewers that Frank is serving 18 years for murder – for which the details and nuance are meted out in sparse, intermingled flashbacks that infuriate as much as they enlighten. Frank gains his freedom by jumping out a second-story window of a hospital after an appendectomy. As a result he’s got a weeping wound in his side, while Adele (Winslet), the woman he takes captive, has a hole in her heart, lazing around her house too inert to do anything. Her 12-year-old son, Henry (an effective Gattlin Griffith) pretty much sees after himself, but the sleepy old Victorian they share – as evidenced by the overgrown lawn and general state of disrepair – isn’t so lucky.

So there you have it, Frank’s physically damaged and Adele’s emotionally scarred (she had several miscarriages after Henry, became depressed and her marriage dissolved) and the one can heal the other if the lurking police don’t intercede first. After a carjacking, Frank ends up at Adele’s house, where holing up becomes hanging out. Besides fixing the front porch and putting up drywall, he proves pretty good in the kitchen, whipping up a tangy chili out of nothing. And pie? Boy, can he bake a pie.

The film’s peach pie scene is one for the ages. Never before, certainly not since “Ghost,” have hands on hands taken center stage with such inflamed hyperbole. In “Ghost,” it played to the texture of the film. Here, with such fine actors so debased, it feels soft-core cheesy and wrong. “Let’s put a roof on this house,” Frank growls as a trembling Adele fumbles with a pancake of thick dough. Reitman, who penned the script from Joyce Maynard’s novel, must have thought the scene smart and leavened with innuendo and metaphor, but as is it has the sensory effect of chocolate mousse made from a package of stale Hershey’s Kisses.

Food becomes a recurring if unbridled motif, and a point of bonding for Frank and Henry. Frank also teaches the boy to throw a baseball, and there’s a touching scene with the handicapped kid from around the corner who’s allowed to play third base – but of course, the police loom and the film, as the title suggests, is limited to a long weekend.

The good news is that as the film sails into its final chapter, the pace, as well as Reitman’s directorial skills, pick up. Winslet too, so shellshocked and unkempt for so long, seizes the opportunity to blossom and fills the screen with her ripe yet restrained sexuality. She and Brolin, like Frank in the kitchen, take what’s there and with sweat, integrity and resolve, make the best of the meager makings that have been dealt to them.