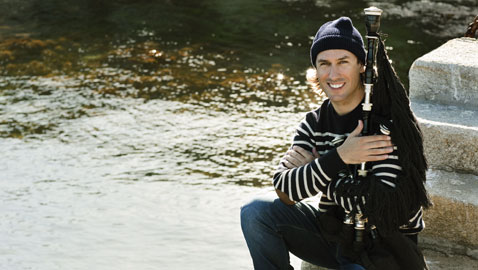 The very essence of Cambridge’s Revels traditional performance organization is “songs and stories passed down through the generations,” and plenty of folk repertoires go so far back in time it’s impossible to identify who wrote a song or began a dance form. But Revels is on a mission to find the cutting-edge future of folk.

Friday sees the first Revels Fringe, which is intended to introduce the city to artists expanding the boundaries of “traditional” in a variety of styles, group publicist Alan Casso said.

“Rather than simply preserving tradition, Revels is dedicated to bringing tradition to life,” Casso said.

The artist launching the series is Carlos Nuñez, a Galician bagpiper recently on a world tour with the Chieftains and part of the most recent Boston Summer Arts Weekend, held in July in Copley Square. Among his band are harpist Maeve Gilchrist, local fiddler Hanneke Cassel and Revels veteran Stan Strickland on soprano saxophone.

“This is the first time Revels has attempted anything of this sort,” said Revels’ music director, George Emlen. “This event puts six immensely talented musicians on stage together, all of whom have a desire to explore the intersections of their various musical influences. I can’t think of a better way to launch the Revels Fringe program.”

With Nuñez and his band, an Afro-Cuban jazz standard will lead into an uptempo jig and audiences will enjoy a raucous mashup of English Rapper Sword and Galician traditional dance, Casso said. Future Revels Fringe events could further explore Celtic fusion, jazz-inflected traditional tunes and new modes of traditional dance.

“Revels Fringe will offer events, concerts and workshops designed to attract those in the community with a curiosity about what new ideas, styles and performers are interesting to us at Revels,” Casso said.

Revels Fringe with Carlos Nuñez and Friends take place at 7:30 p.m. Friday at The Center for Arts at the Armory, 191 Highland Ave., Somerville. Balcony tickets are still available for $25.