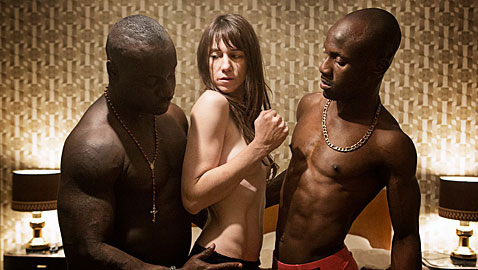 Danish director Lars von Trier has always been a puckish provocateur and enfant terrible – and to some, worse, considering his Nazi-sympathizer comments at Cannes 2011 (for which he later offered apologies before defiantly taking it back). As a filmmaker, however, his genius has always been right up on the screen in the minimalistic, stagelike lo-fi style he encapsulated with the Dogme 95 manifesto. It’s not for everybody, and it can be trying, but for those willing, a von Trier film is an experience that boils down the human condition into provocative and uncomfortable pokes in the eye while forcing you to confront yourself. 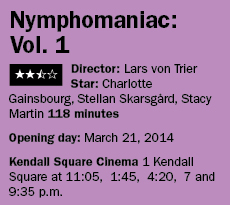 The most emblematic of von Trier’s vast filmography might be one of his lesser-known works: the 2003 curio “The Five Obstructions,” in which von Trier challenges mentor Jørgen Leth to remake his 1967 short film “The Perfect Human” five times, each with a new restricting specification. One obstruction has Leth make the film in the worst place on earth (the slums of Mumbai) and another has him do it as animation (a form both directors detest); and with each new needling hurdle he lays down, von Trier grins with impish glee while shoveling mounds of caviar into his face.

That’s how one might see von Trier with his latest, leering out at the audience as they sit through “Nymphomaniac,” a film meant to provoke in title alone. The construct is quite simple: A middle-aged loner named Seligman (von Trier regular Stellan Skarsgård) discovers a woman beaten on the street and takes her home to help her mend. As she sits in his bed in his humble apartment, Joe (Charlotte Gainsbourg) tells Seligman she is a terrible person. When he calmly asks why, she recounts her life, beginning with the demurring opener, “I discovered my cunt when I was 2.”

The film is told in effective flashbacks to the younger Joe (Stacy Martin) as she loses her virginity (three thrusts in the front, five in the back) to a mechanic named Jerôme (Shia LaBeouf) and embarks on a life of sexual addiction, coupling with several lovers over the course of a day. Why is unclear. She has a loving father (Christian Slater, in an odd bit of casting) but refers to her mother (Connie Nielsen) as “a cold bitch,” so trying to determine the root for such an appetite/dysfunction is an obstruction in its own right; but this is just Volume 1 of a two-part contemplation, so perhaps in the follow-on answers will come.

The sex is graphic, but not groundbreakingly so, and not titillating. It’s more in-your-face and underscores Joe’s claim of being a horrible human, especially when she lines up back-to-back lovers and the initial interloper decides to leave his wife for her. His return with suitcase in hand is an awkward moment that builds even more when he’s followed through the door by his wife (Uma Thurman, serving up the most real and felt performance) and their three sons.

There’s a choppy cadence to “Nymphomaniac” as it veers off into such strange tangents as Slater’s character winding up in a hospital with delirium (could that be the root?) and soiling his bed so prolifically you again wonder at the meaning of it as the scene lingers with an army of nurses rolling him over and sopping at his anus. Then there’s Seligman’s academic interest in Joe’s conquests, likening her to a nymph for fly fishing or her combination of perfect lovers to a symphonic triumvirate. Some might see such probings as intellectual or poignant, but they often come off forced and unwittingly silly. The first few (soft-core) “Emmanuel” films, which critic Roger Ebert heralded, offered light and breezy philosophies for their heroine’s sex-laden misadventures, but here, amid the darkness, lack of soul and pretentious aggrandizing, there’s a banal vapidity.

In von Trier’s 1996 film “Breaking the Waves,” the sex and depravity is affecting as a paralyzed laborer (Skarsgård) urges his wife (Emily Watson) to seek carnal activities with others for his own fulfillment. The emotional dilemma is etched on Watson’s face with nuanced brilliance; Gainsbourg’s Joe, on the other hand, is an assured cold fish lacking remorse yet attuned to the moral value of her activities – an elephant of a conundrum that sits in the room passively and ignored as Joe and Seligman carry on. Von Trier has embarked on such an odyssey with the promise of an opening up beyond its heroine’s thighs, and so far there’s nothing but the tangled void of meaningless sex intellectualized to the point of meandering meaninglessness. That renders “Nymphomaniac” just a notch above art house porn.