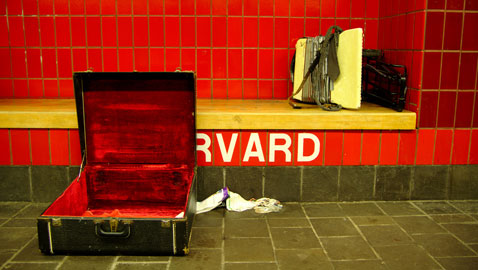 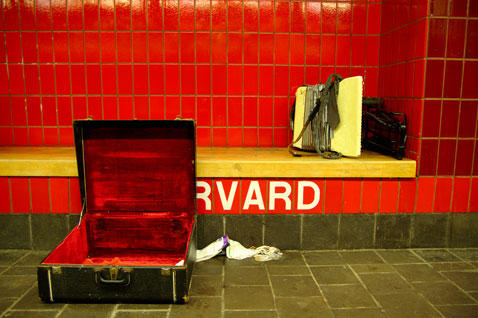 The Massachusetts Bay Transit Authority, which has a mixed history with hosting musicians and other entertainers, hasn’t moved to add buskers to its late-night program. (Photo: Michael Hall)

A yearlong test of late-night T service starts Friday, putting an untold number of probably younger partygoers, bar-hoppers and insomniac eccentrics on platforms waiting for longer than usual to climb on a subway bound for home. (A train will arrive every 15-20 minutes “in most cases,” the Massachusetts Bay Transit Authority says, but people could wait up to 40 minutes in a few places.)

They’ll be waiting with no entertainment but each other.

Future Boston, the group that encouraged extended hours as a path to a regional cultural renaissance, thought it made sense to get buskers in place to entertain the waiting crowds. Malia Lazu, founding director of the alliance, told Boston Magazine in a March 13 item:

What we would love to do is, we have a lot of live artists and singers, and we thought it would be fun to get them at train stations that are busier – near Fenway Park, or South Station – to create a fun atmosphere and give people another reason to want to take the train. Why not give people a way to have a chance to see new artists and have a little fun at the same time?

The idea makes even more sense if you’ve spent much time in the custody – er, company – of young drunken Bostonians on a T platform when subways come at even a normal, non-extended-hours pace.

But checking in with experienced buskers such as Mike Hastings and Roger Nicholson, it turned out the people most likely to take advantage of this captive-audience pacification program had heard nothing about it.

Only two days before the extended hours started, T officials have yet to embrace the idea.

“The request has been received, and it is under review. No decisions have been made at this time,” said Joe Pesaturo, spokesman for the agency, in a Wednesday email. “It’s important to stress that no one is permitted to perform, at any hour, in an MBTA station without first obtaining the necessary permit.”

The T has traditionally not been the biggest fan of buskers. In 2003 it wanted to unplug musicians so people could hear loudspeaker announcements in case there was another 9/11, although its loudspeaker announcements were incomprehensible, garbled squawks on their own; four years later it tested T Radio, canned programs playing on platforms that drowned out live musicians. Riders drowned it instead.

The alliance is also running an Indiegogo campaign, launched March 12, that wants to raise $30,000 to become a sponsor of the late-night T service and “build out late-night ridership programs, including public education and T parties by targeted train stations.” Response as of Wednesday was underwhelming – 11 funders throwing in $5,579 in two weeks, with $5,000 of it coming from Gregory Selkoe, the Karmaloop apparel founder who is also the founder of Future Boston. It’s possible the prizes and goals create indifference in potential contributors ($100 to be invited to a party “to encourage late-night service,” $5,000 to take a T ride with Selkoe, Boston city councilor Tito Jackson and unnamed others), or that riders just want to pay to ride, not pay and pay to ride.

Emails to Lazu and Future Boston hadn’t been answered as of late Wednesday.