‘Cesar Chavez’: This biopic doesn’t quite do justice to a paragon of social justice 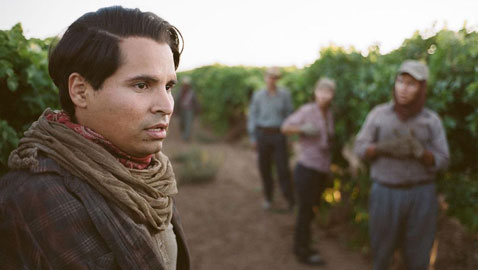 ‘Cesar Chavez’: This biopic doesn’t quite do justice to a paragon of social justice

Longtime actor Diego Luna (“Elysium” and “Y Tu Mamá También”) steps behind the lens for this biopic about the titular labor legend of the ’60s and ’70s who helped organize Californian farm workers being exploited by their employers, working long hours and living in poverty and fear of retaliation for resistance. 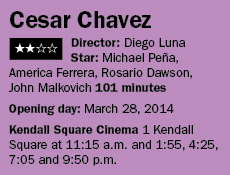 No, it’s not the first time Luna has been in the director seat, but it somewhat feels so. Biopics in general are stilted; there is little element of surprise. That’s not to say they can’t be lit up with the right director or actor – take “Norma Rae” or “Erin Brockovich,” but those films were directed by master filmmakers (Martin Ritt and Stephen Soderbergh) and actresses who took home Oscars (Sally Field and Julia Roberts), but the key to such a film is conflict and how the hero or heroine navigates adversity and perseveres.

As Cesar Chavez, Michael Pena, who has been the go-to Latin actor for every film from “Crash” onward, seems to lack the fire and direction of a man whose history is defiance in the face of tyranny. Much of the time the camera is on his face he looks lost. America Ferrara (“Ugly Betty”) is a fireball as his wife, as is Rosario Dawson as another minority organizer. They outshine Pena, though I’m not so sure it’s all Pena’s fault. The film makes him an accidental hero and a man who seems conflicted and disinterested in his family. The greatest underscoring of his legacy comes through newsreel footage and the recreation of Bobby Kennedy (Jack Holmes) hailing Chavez as an American hero after a three-week-plus hunger strike.

The notion of immigrants and different immigrants classes brought up by John Malkovich’s Slavic grape baron, is piquant. So is the notion of the Latin Chavez as a minority immigrant organizing a union when today most unions are largely anti such ilk.

Pena has been a pleasurable supporter in films including “Million Dollar Baby” and “American Hustle,” so it’s disappointing to see his chops take a hit here. Luna’s on the hook too. Chavez, like Gandhi, was about passive resistance. The thing that Luna and Pena got wrong was being passive about the man who employed such a tactic.