‘Dom Hemingway’: 12 years in prison makes Dom due for a very good year 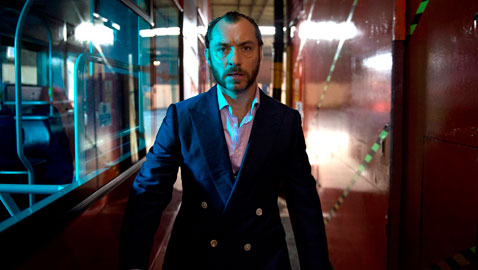 ‘Dom Hemingway’: 12 years in prison makes Dom due for a very good year

If you always thought Jude Law was a neat and buttoned-down lad like the square journalist he plays in “The Grand Budapest Hotel” or Watson in the “Sherlock Holmes” films, guess again. As the titular Dom Hemingway he’s something of a Cockney bull akin to Bob Hoskins in “The Long Good Friday” or Michael Caine in “Get Carter,” and even more so the Kemp brothers in “The Krays.” In short, he’s feral, unhinged and lethal, but that’s not to say Law’s daunting effort makes the film worthy of inclusion in that pantheon of great British mob dramas. 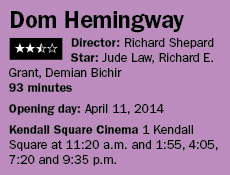 The film opens energetically enough, with Law’s Hemingway barking out poetic praise for his “cock.” Where he is and who is worshiping his manhood becomes quickly apparent. Dom’s shortly thereafter released from a 12-year prison stint and sets his sights immediately on the guy who married his ex-wife and cared for her when she became stricken with cancer and died. Dom sees it as the guy stole his wife (even though they were long divorced) and gives the unfortunate bloke the punishment an angry weightlifter would give the cable guy should he find him in bed with his wife.

Dom’s got pretty severe anger issues and likes to hit the bottle hard, which triggers some unhappy and deadly tidings when he pays a visit to the Russian kingpin he took the prison time for. Then there’s his daughter, with whom he wants to make amends but can’t sober up long enough to get the apology off his chest. Not much goes Dom’s way. He’s a yegg but can’t land a decent safecracking gig. He’s a ticking time bomb packed full of hubris. But he does have one loyal friend in Dickie (a wonderfully foppish Richard E. Grant), another petty entry in London’s criminal underworld who’s just as rudderless – and newly missing a hand.

Much of what holds “Dom Hemingway” back is the overwrought contrivances and lack of plot articulation. Writer/director Richard Shepard wishes fervently to be Quentin Tarantino, and while he can cast some snappy visuals and cut together a few nifty, dark scenes, there’s too much inert frivolity in between. The moments of true revelation feel obligatory and insincere, and sometimes Dom’s so inexplicably mercurial you wonder if he shouldn’t be treated for bipolar disorder. It’s too bad, too, because the actors really put it on the line.

There’s something rich inside of “Dom Hemingway” that just didn’t get mined. For whoever helms the next great nasty British crime drama, be sure to put Law and Grant on your speed dial.