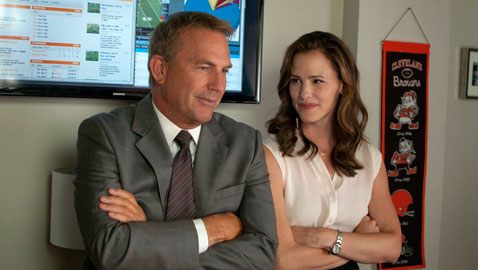 Here’s something new: Kevin Costner back in a sports movie. Okay, maybe not new, but this time it’s football and not baseball, and he’s traded his cleats for a front-office job. “Draft Day” is supposed to be a funny, quirky race against the clock-cum-romance like “Jerry Maguire,” but it’s not all that funny. Costner channels his signature assured nonchalance as Sonny Weaver Jr., general manager of the Cleveland Browns. 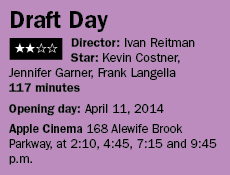 The film starts off on the morning of the big, titular day with Sonny going back and forth with his girlfriend Ali (Jennifer Garner) about who he might pick. And of course she has some big news to tell him, but his phone keeps ringing. Cleveland has the No. 1 pick in the draft and everyone wants it because there’s a QB out there who’s the next Tom Brady – interesting timing because the team that’s after him the most, the Seattle Seahawks, have Russell Wilson and just won the Super Bowl. It’s kind of the same post-shoot conundrum that afflicted “Fever Pitch” when the Red Sox won their first World Series in 86 years and the filmmakers had to scurry to stay with the times).

Sonny, who fired his beloved dad as head coach, seems to be a front office bonehead as he trades away the team’s next three No. 1 picks and appears to be on the verge of being shown the door by the team’s owner (Frank Langella), who’s just as concerned about flash and pomp as he is winning. It doesn’t help that Ali works for the Browns as well and they’re not out as a couple, even though everyone knows.

In short, Sonny’s in a world of shit and I won’t even mention the issues with his mother (Ellen Burstyn), ex-wife (Amanda Peet) or head coach (Denis Leary, playing a Barry Switzer-esque role in that he had a Super Bowl ring because he inherited a championship-caliber club).

As the clock winds down in the fourth quarter, the whole back-and-forth of the deal becomes more tiring than successive spring training sessions, as does the “are they, or aren’t they?” water cooler talk. All the actors are fine; it just feels like they’re given sawdust to recite and a circuitous plot that offers little payoff. It’s a neat premise, and there are some attempts at deepening the human interest aspect of it (a star athlete trying to get paid to support his family of slim means vs. the flashy QB who may not be all he appears to be), but the drama of the real draft and the unscripted nature of it bears far more intrigue and consequence. Next time producer/director Ivan Reitman (“Ghostbusters”) should draft a better team of writers.