‘The Railway Man’: Incredible true story, even if director isn’t the best conductor 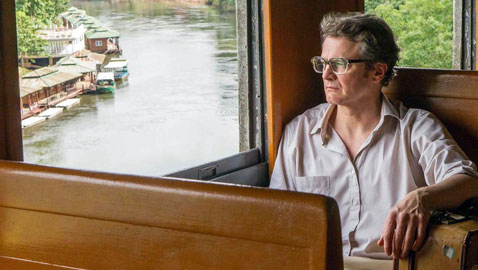 ‘The Railway Man’: Incredible true story, even if director isn’t the best conductor

“The Railway Man” is one long therapy session revolving around one veteran’s struggle with PTSD that has plagued him for years following his incarceration in a World War II Japanese prison camp. It casts shades of “The Bridge Over the River Kwai” and “The Deer Hunter.” It’s also a true story based on Eric Lomax’s memoir of coming to terms with the demons of war that tormented him for much of his adult life. 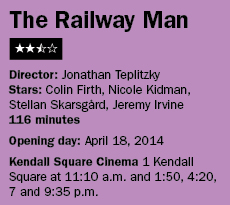 The film begins tranquilly enough in a sleepy little English shore town in the 1980s, where at a men’s club meeting over beers, the somewhat reluctant Eric (Colin Firth) wistfully recounts his affection for Patti (Nicole Kidman), a women he met recently on a train. Trains and railways happen to be an obsessive hobby for Eric (thus the title). He’s also a kind and engaging soul, and soon enough he and Patti are moving toward marriage in all the most maudlin and pat ways possible. It’s here the film begins to feel dangerously like a large, sugary gobstopper, all fluff and no fire, but then the closet door opens and the skeletons start to pour out. Eric erupts in night terrors, he’s fiscally a disaster and sometimes he mutters to people who aren’t there.

It turns out that men’s club is what’s left of a battery of British soldiers taken prisoner by the Japanese during the fall of Singapore.

In flashbacks we learn that the group built a covert radio to hear what was going on in the outside world. The device was held as an icon of defiance and a beacon of hope, but when it is sussed out and the group is brutally hazed, the meek and reserved Eric (the younger incarnation played with soulfulness by Jeremy Irvine) steps forward to exonerate the others and, on his own, endures weeks, if not months, of torture that leaves his soul more broken than his body.

Back in the now, Patti, suddenly bearing the emotional burden, appeals to one of Eric’s group mates (Stellan Skarsgård) for help. The result is a continent-hopping quest to find one of the Japanese handlers who oversaw the torture of the Brits. Tragedy and revelation loom in an odyssey littered with twists and turns that, if they weren’t real, would otherwise seem incredible.

The film is built around confronting the ills of the past that live in the present. There’s a wall that needs to be broken down and surpassed for Eric to move on and be at peace with Patti, but the handling of such delicate, nuanced events by director Jonathan Teplitzky is anything but. Firth, who scored an Oscar for “The King’s Speech” and was even more compelling in “A Simple Man,” is as dutiful in holding up his end in the film as Lomax was at protecting his prison camp mates. Kidman adds a doe-like softness and understanding, but her character is tied largely to being a satellite orbiting the two sides of Eric. You can’t deny the human journey and the moving nature of it, but sometimes such affecting power requires deftness, care and patience.